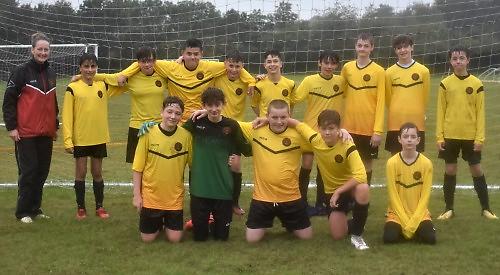 AFC HENLEY HAWKS U14s progressed to the next round of the East Berks Plate last Saturday thanks to a 5-1 home win against CAVERSHAM AFC RANGERS U14s in a match played out in heavy rain at Jubilee Park.

The first half was a tight affair with the Hawks pressing Caversham. Freddie Formon was a constant threat on the right with pin point passes supplied by right back James Harris.

The Henley defence was not called into acion too much, but when it was the back four were ably managed by centre back Mikey Dowling and keeper Max Lunnon.

Dowling kept the Caversham attacks muted and under control while fellow centre back Louis Catlin made some key interventions and Lucas Wilson and Daniel Flowers covered left back ably with Flowers making moves and passes up the wing to spearhead Henley counter attacks.

The Hawks were strong in the centre of the pitch with captain Ruben Wallis-Robinson commanding the midfield with support from Kits Tanner and Lillie-Maye Clark.

The Hawks created several chances in the first half with Harry Graham denied by the Caversham keeper. Henley’s persistence wore down the Caversham defence and player-of-the-match Formon made a run down the line, fought off opposition with his speed and made a cross into the box where the ball came off a defender to Jenson Lea who turned him before scoring in the bottom left corner.

Ten minutes into the second half Dowling passed to Wallis-Robinson who charged towards the Caversham goal before scoring from outside the area to make it 2-0.

Henry Mahoney was constantly pressing and working balls through to striker Graham while George Acock was making runs down the left and came close to connecting with crosses from Formon and Harris.

The hard work paid dividends as Henley were rewarded with a number of corners. Lea arched one of these into the box and Mahoney took his chance and slot home into the bottom corner to make it 3-0. Henley were relentless and Formon put in a cross in from the right that found Lea in front of goal who turned to deflect it past the keeper.

At 4-0 Rangers were still fighting and making some ground on the Hawks goalkeeper Lunnon was kept busier in the last quarter and made a couple of fine saves.

Caversham’s pressure eventually paid off as they managed to converted a follow up ball after an initial fine save by Lunnon to make it 4-1.

Tanner down the right then sent in a ball to Formon who got himself into space before unleashing an arching shot over the keeper into the top corner to wrap up the scoring.

In the league AFC HENLEY HOTSPURS U14s went top of their division thanks to a 6-3 home win against BRACKNELL YOUTH U14s.

The Hotspurs were 5-2 up at half-time after goalkeeper and team captain Ben Palmer made several impressive saves to deny Bracknell a route back into the game.

Tyler O’Brien added to the score line with a strong shot from long range that looped over the keeper into the net to make it 6-2.

Bracknell were reduced to 10 men at the latter end of the second half after an excessive reaction to a challenge.

Bracknell bagged a consolation goal near the end of a game from a free kick but this did not stop Henley securing their third straight win.