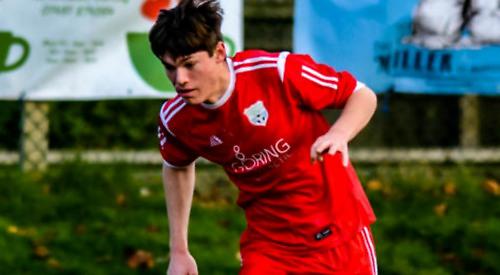 THE wet weather last week resulted in more than half of the opening weekend’s fixtures in the Thames Valley Premier League being postponed due to waterlogged pitches.

Of the games that were played, HENLEY TOWN’S new manager Tom Guy saw his side get off to a winning start as his team ran out 3-0 winners at BERKS COUNTY RESERVES in their Division 2 clash.

Henley adapted well to the wet conditions and the 4G pitch and almost found the opening goal in the fifth minute when a Charlie Douglas shot just inside the box and clipped the post.

The home side created several chances but were thwarted by fine saves from debutant goalkeeper George Allen.

Henley took the lead on 25 minutes when good foot work from Dan Sykes allowed himself room to fire home into the bottom right hand corner.

Shortly after Henley doubled their lead after some strong play from Harry Douglas down the right wing saw him fire a low cross into Charlie Douglas who made no mistake with a clinical finish.

Early in the second half half Berks County saw their striker unleash a shot outside the box that clipped the inside of the post but Henley were first to react to the loose ball and managed to clear their lines.

Henley made sure of the win when Jack Woodley managed to intercept the ball and race through on goal and cooly slot it past the Berks County goalkeeper.

Goring played possession football throughout the game and took the lead after 12 minutes when Josh Monk finished easily after good work from Tom Heslop. Monk soon added a second, receiving the ball from Josh Stevens before outpacing a defender and firing high to the keepers left. Matt Hayden set Heslop up for a third goal whilst Monk added two more to give Goring a commanding 5-0 lead at half time.

Twyford briefly threatened to come back into the game for the first 10 minutes of the second half but their resistance was ended when Monk turned home Dan Houseman’s goal bound header from close range.

Substitute Harry Voice then provided a clinical finish before Houseman headed home from a George Scoffham corner. Voice outmuscled a defender to race clear and score his second before converting from close range for his hat-trick.

Matt Ploszynski completed the scoring with an unstoppable drive to complete a fine team performance.

HAMBLEDEN’S East Berks League side’s match was one of only a handful to survive the bad weather as the hosts drew 1-1 with STOKE POGES in their Division 1 clash.

In an evenly contested match Hambleden took the lead with a 35-yard free kick from Gaby Pinto, the visiting keeper making a mistake and spilling the ball over the line in the wet conditions.

Hambleden had chances to extend the lead but found the opposition keeper more than made up for the earlier blunder with a string of fine saves.

In the second half Stoke Poges drew level when a free kick was drifted in and headed goal wards, the Hambleden keeper Dan James made a point blank save, but the rebound fell to the unmarked forward to tap in.

Hambleden won a penalty in the 75th minute when Jonny Openshaw was hacked down in the box. Pinto stepped up after a long delay in the taking of the kick but pulled it wide.

Late drama ensued when Stoke Poges hit the post with a free kick before the match ended in a draw.