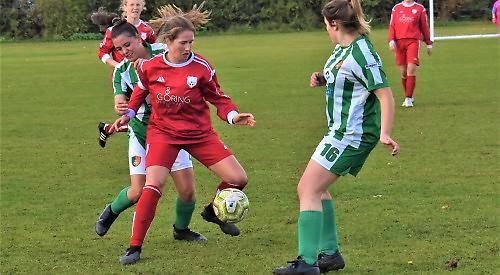 Yateley started the match on the front foot, with Goring struggling to get into the game early on due to the sharpness of the opposition who were quick on the counter attack.

The early pressure told for the visitors when, after 20 minutes, a straight ball through the defence left a Yateley striker through on goal to open the scoring.

It could have been a greater scoreline were it not for vital saves from Hannah Weller in goal, and defensive tackles and interceptions from Alex Llewellyn and Sharon Murphy.

Despite the pressure from the opposition, Goring came back into the game late in the first half and had Yateley pinned in their half as the hosts had a couple of shots saved while the flurry of corners that followed led to nothing.

The second half started in the same vain with Goring having most of the territory but unable to make this territorial advantage pay.

With Goring having most of the territory, they were eventually caught on the counter attack when a long through ball was latched onto and put away to make it 2-0 after 65 minutes.

More frustration was to come Goring’s way five minutes later when a ball was played across their own goal, which a Yateley attacker ran onto, finishing well.

There was some consolation for the home side as Louise Axon latched on to a through ball and finished low with just minutes of the match remaining.

AFC HENLEY won their second match of the season as they triumphed 3-1 away at WYCOMBE SAINTS. Henley attacked relentlessly in the first half with the majority of play in the Wycombe half of the pitch.

Just before half time the home side broke away to pull a goal back.

Injuries in the second half saw Palmer and Megan James replaced and this led to the visitors losing some of their pace on the wing and up front.

However, a third goal did come for Henley scored by Hill direct from her own corner. A sturdy defence with skipper Louise Colam, Bex Daly and Maria Porterro held off a flurry of attacks from Wycombe towards the end of the match with man-of-the-match Charlotte Currie proving an invaluable defensive midfielder.