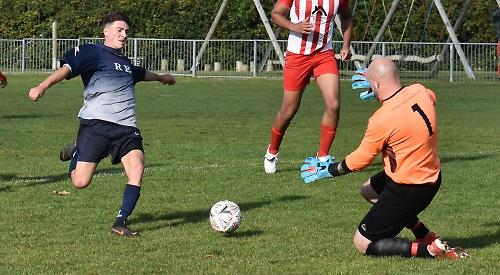 EMMER GREEN got their Senior Division season off to a winning start as they ran out comfortable 6-3 winners at TWYFORD COMETS.

The visitors were in control early on and were rewarded after 10 minutes when James Bozarth found Lorenzo Medford in space who produced a composed finish.

The lead was doubled midway through the half when Bozarth was involved again, unleashing a 30 yard strike into the top right hand corner of the net.

Emmer Green continued to control the game in the second half and made it 3-0 when Andy Rossiter broke away and lobbed the Twyford goalkeeper.

Soon after a pin-point through ball from Jordan Cox was again converted from Bozarth.

Medford then found space on the left side and rolled the ball across the penalty area for Bozarth to tap home and complete his hat-trick on his debut.

Twyford pulled two goals back before Jordan Cox got the better of a 50/50 challenge with the Twyford goalkeeper to wrap up the scoring.

Elsewhere in the division HENLEY TOWN went down to a 4-3 home defeat against BURGHFIELD.

The hosts started the game slowly and found themselves 1-0 down early on when a corner was deflected in off a Henley player.

Shortly after Burghfield went 2-0 up when a low shot from just inside the box found the back of the net.

On 20 minutes Henley went further behind when they conceded a penalty which the visitors converted.

For the remainder of the first half Henley started to get the ball down and played some decent football with midfielders Sam Earl, Dan York and man of the match Jake Jones starting to dictate play. Earl tested the Burghfield keeper with a good effort from 25 yards which was tipped around the post.

Henley pulled a goal back five minutes before half time when Charlie York made a block on the touch line which fell to Earl who setup Jones for a shot on the edge of the box which was cleverly chipped over the Burghfield goalkeeper.

Henley started the second half better and were starting to have more of the ball and looked solid at the back. However, with their first opportunity of the half after 70 minutes Burghfield made it 4-1 from a corner.

Henley didn’t give up and were rewarded with a second goal when Nico Cheesman was fouled near the touch line 30 yards from goal. Charlie York stepped up and curled the free kick straight into the top corner to reduce the arrears to 4-2.

With five minutes of the match remaining Henley scored a third goal when Jones got his second of the game after Finch played the ball to the back-post for a simple tap in.

Henley tried to grab an equaliser in the final three minutes of the match but Burghfield held on to secure the points.

The home side took the lead mid-way through the first half when Archie Denton’s weighted through ball found Luke Potter who rounded the keeper and slotted home for his first of the day.

Emmer Green doubled their lead on the stroke of half time when Potter grabbed his second. Good work down the right hand side from George Dallarda saw him cut the ball back for Potter to score from close range.

Lewis Jenkins added his side’s third in the second half with a deft flick following a pull back from the by-line.

Woodley pushed forward to get back into the game but Emmer Green’s defence stood strong with Joe Harvey and David Mortimer keeping the visiting strikers at bay while Jamie Reid made some strong saves when called upon.

Potter completed his hat-trick with his side’s fourth goal of the day with a composed finish. The home side had a chance of making it 5-0 when Dallarda was tripped in the box but Charlie Cooper failed to convert the resultant penalty.