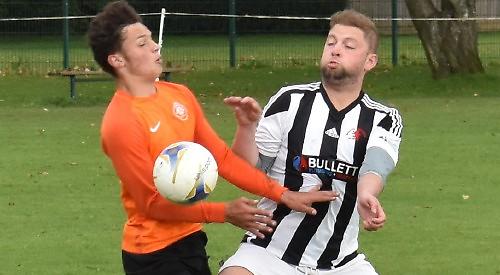 WATLINGTON TOWN got their season off and running last Saturday as they recorded their first Division 2 East win of the season at COVE U23s in a match in which substitute Adam Holloway netted a hat-trick.

Holloway, who was making his first appearance for the club since returning from a spell living the the USA, came off the bench in the first half of his side’s 5-2 win.

Town conceded early on when a long set piece was played into the box where Dom Selwood, at full stretch, saw the ball come off the top of his head and into his own net.

Watlington went 2-0 down in bizarre circumstances when from a drop ball, in which the referee asked Cove to play it back to Watlington keeper, the ball sailed over Jack Young’s head into the back of the net.

In sporting fashion the Cove management instructed their side to allow Kevin Hudson to run through and score.

Town pulled level when Chris Swales found Chris Witchel on the edge of the box who unleashed a shot into the roof of the net.

The visitors were now in the ascendancy but Cove still looked a threat from set pieces and on the break but the defence of Jon Little, Dom Selwood and man-of-the-match Ben O’Connor dealt with these well.

Watlington took control of the second half early on and got their reward when substitute Holloway got on the end of a Hudson through ball before beating the home goakeeper in a one-on-one situation to make it 3-2.

The same combination linked up again 15 minutes later with Hudson assisting Holloway to make it 4-2.

The midfield of Darren Outten, Alex B’layachi and Martin Williams were starting to control the game, winning their battles and creating chances for the forwards.

On 77 minutes Town wrapped up the scoring when a Williams free kick was dropped by the keeper and Holloway was quickest to react to slot home from a narrow angle and seal his hat trick.

Williams went close to adding to the scoring but his shot was dragged wide while substitute Owen Wood and Darren Outten also went close.

WOODCOTE continue to find life in Division 2 South tough as they slipped to their second consecutive 7-1 defeat of the season, this time at home to KINTBURY RANGERS.

Although they were put immediately on the back foot by a young Kintbury outfit, who raced into a 2-0 lead inside the first 15 minutes and added to their lead after 30 minutes, Woodcote did give themselves a glimmer of hope when Daniel Boateng reduced the arrears with a smart finish following a Frank Dillon corner. Soon after Woodcote had a penalty appeal turned down.

Kintbury could have been out of sight but for several fine saves by Ben Lallament in the Woodcote goal.

Right at the end of the half, any hopes that Woodcote might get back into the game were dashed when Tommy Brownlow was shown a second yellow card following a foul.

The only glimmer of hope in the second half came in the first minute when Boateng, Woodcote’s best player on the day, saw his powerful header rebound off the bar. Thereafter it was a stroll for Kintbury as they scored at regular intervals.

Woodcote’s cause had not been helped by having key players missing, especially defenders, either through injury or work commitments and the scoreline could have been higher if it was not for Lallament’s heroics.