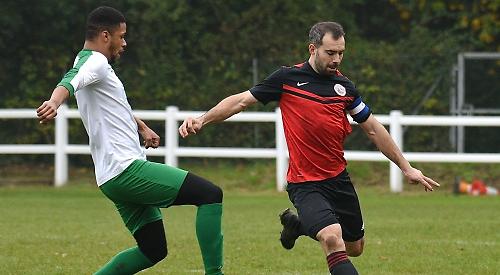 EMMER GREEN made it two Senior Division wins from two matches played as they ran out 2-1 winners at COLEY PARK.

The visitors started the better of the two teams and had several chances from set pieces which brought a number of good saves from the Coley goalkeeper.

Emmer Green took the lead when captain Daniel Donegan picked up the ball on the right hand side and his pinpoint cross was converted by Jordan Cox.

The visitors’s front two linked up for the second goal as Lorenzo Medford found James Bozarth who converted for his fourth goal of the season.

Emmer Green began the second half brightly but were reduced to 10 men 15 minutes into the second half when a player was dismissed for picking up two yellows cards. This was followed by a quick fire goal by Coley Park.

Emmer Green continued to create chances and held out to secure the points.

HENLEY TOWN suffered their second defeat of the season as they went down 3-0 at home to WOODLEY WANDERERS.

The hosts started the match brightly before Woodley gained control of the midfield and started to dominate.

Henley started the second half well and were starting to gain more control as Jack Earl came on and began to run the midfield.

Woodley were awarded a penalty following a foul on their striker in the box from which they converted.

Henley went close to equalising when Earl hit the post. The hosts were also denied by two good saves by the Woodley goalkeeper.

The home side found themselves 2-0 down when a Woodley player scored form a shot from just outside the area.

Henley battled hard and tried to get back into the game but had no luck in front of goal and conceded the final goal from the last kick of the game.

In Division 1 EMMER GREEN RESERVES shared the points with visitors WILLIAM TWIGG in a gutsy encounter. The first half was goalless as chances were squandered by both sides.

William Twigg took the lead in the second half when a scramble in the box was not dealt with and the visiting forward converted.

Emmer Green were level when Archie Denton took a quick corner and Charlie Cooper was fouled in the area to give home side a penalty. Luke Potter made no mistake from the spot.

The hosts went in front when Ben Frodsham scored his first goal for the club with a good finish on the hour mark. William Twigg fought back to level the scores with a scrappy goal.

GORING UNITED ran out 3-1 winners in their home Division 3 clash with ROMANIA UNITED.

In a tough tackling match, an early foul from the away side led to a free-kick just inside their half. George Scoffham delivered a floated ball in and after a weak clearance it fell to Andy Taylor who drove home.

The game continued to be a hotly contested affair and 10 minutes later Goring won a penalty after a throw from Joshua Stevens was controlled by Taylor who was fouled in the box. Tom Brownlow despatched the penalty to make it 2-0.

The visitors were on top for 20 minutes which eventually led to them pulling a goal back from a corner.

The second half was controlled by Goring, with the visitors barely calling Andrew Symonds into action.

After a Dan Wallace goal being flagged offside, Jake Turnbull found himself in space in the box to score his first goal for Goring.