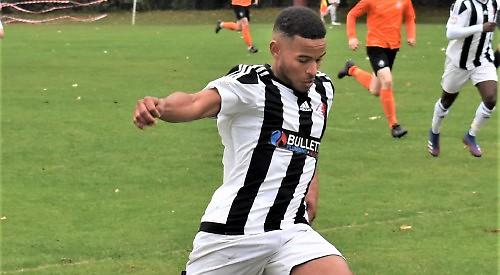 WOODCOTE recorded their first victory of the season with a narrow win against visitors SWINDON SUPERMARINE DEVELOPMENT in the first round of the cup last Saturday.

The home side could have been
2-0 up inside the first half-hour, but Daniel Boateng’s shot rebounded off an upright and Jake Dillon failed to hit the target when well-placed from brother Frank’s cross.

Swindon played some neat football but lacked a cutting edge and never troubled Ben Lallament in the home goal.

Two more chances came Woodcote’s way but were thwarted by good saves from the Supermarine keeper. This pattern of play continued in the second half with Woodcote creating chances which they were unable to convert.

It was no surprise that the winning goal, midway through the half, came from an error when the keeper’s attempted clearance fell to the impressive Rafa Brandao who had the simplest task in finding the empty net.

Overall this was a much better performance by Woodcote based upon a solid defence in which Alec Curtis and Josh Beisley were outstanding, with good support from Nick Slatcher and Frank Dillon.

In midfield, Tommy Chapman dominated and the decision of manager James Worsfold to play himself up front helped to give the team greater cohesion.

Elsewhere in the competition WATLINGTON TOWN crashed out 3-2 at ASTON CLINTON RESERVES.

The game started as a scrappy affair with neither team taking control. Town struggled to create much in the final third while Aston Clinton looked a threat on the break with their two lively front men.

The home side took the lead after 25 minutes when a striker latched onto a through ball and found the corner of the net. Ten minutes later the hosts made it 2-0 with the centre back losing his marker at a corner to nod home from close range.

However, the home side extended their lead again on the break, a ball played over the top finding the striker who cut inside and bent a strike into the corner of the net.

From the first minute of the second half Town took control and forced several corners before Adam Holloway had an effort cleared off the line.

On 50 minutes skipper Darren Outten found himself in the box to thigh the ball home from close range.

Watlington hit the cross bar through Brandon Burton from close range who was starting to run the game from midfield alongside Alex B’Layachi and Outten.

Town were all over Aston Clinton, creating chance after chance with the ball rarely venturing into the visitors half and when it did Dom Selwood and Jon Little dealt with any threat.

On 55 minutes the lively Tyler Sims beat his man out wide again and delivered a ball across the box for Kevin Hudson to tuck home to make it 3-2.

Town pushed for an equaliser as Jake Braim hit the inside of the post when curling an effort with his right from the edge of the box while Burton met a header from a corner that went just wide.