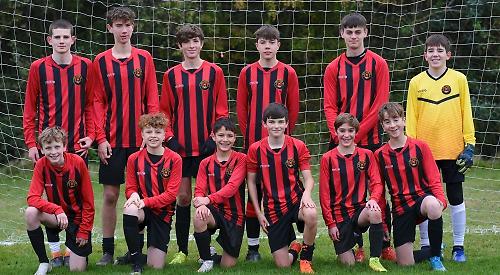 For the first 20 minutes there was little between the teams before the Hotspurs took the lead when Dylan Gadson picked up the ball on the right wing and sent in a cross for Jack Carter who fired high into the back of the net.

Rovers came out in the second half determined to get back into the game but couldn’t break down the defence of Will Verran, Elodie Brough, Freddie Nicholson and James Grant, playing in front of keeper Huseyin Tarhan.

The Rovers’ frustration started to show as they picked up two yellow cards and in the 63rd minute Carter scored his second to make it 2-0.

With 10 minutes to go Rovers missed a penalty with their striker blasting over the bar as the Hotspurs saw the game out comfortably.

The Hurricanes started the game slowly and found themselves 2-0 down inside 10 minutes with captain Oliver Saunders in the home goal was powerless to stop either effort. Saunders was called upon soon after to pull off a good save to deny the visitors extending their lead.

Joe Turner and Tom Atkinson anchored the central midfield and let the Hurricanes get to work further up the pitch. This bore fruit quickly as top goal scorer Rowbotham hauled the Hurricanes back into the game. After a foul on Turner, Rowbotham saw the keeper off his line and placed the resulting free kick into the bottom corner to make it 2-1.

Disruption to the Henley defence led to a lapse in concentration as Bracknell added a third to make it 3-1.

Bracknell added a fourth through a penalty while some rash challenges marred the end of a disappointing performance.

Top-of-the-table AFC HENLEY HOTSPURS U14s put in a solid display as they ran out 3-1 winners at home against WOODLEY UNITED U14s.

The Hotspurs started brightly with two goals from league leading scorer Lucas Shaffner. Both goals came from close range, the first from a Taro Finch cross into the box and the second from a Tyler O’Brien corner. Woodley found themselves back in the game after some hard-fought midfield play ended with a strike from just outside the box.

In the second half both teams played some good football but it was the Hotspurs who extended their lead. Will O’Hagan led a solid run from the right wing into the centre, heading the ball into his path for a pinpoint cross into the box for George Khairallah to fire into the net from close range.

Woodley tried to get back into the game but strong defending and composure on the ball from Max King along with several good saves from goalkeeper Ben Palmer saw the Hotspurs secure all three points.

AFC HENLEY HAWKS U14s drew 1-1 in their derby clash with CAVERSHAM AFC RANGERS U14s. The Hawks started strongly and in the first minute a through ball to Harry Graham saw him shoot just wide.

Minutes later Freddie Formon’s free kick reached George Acock on the left, who found Henry Mahoney in the centre who forced a save from the Caversham keeper.

Minutes later Max Lunnon was called upon to make a couple of good saves to deny Caversham.

The Hawks started brightly in the second half as Mahoney brought a good save from the Caversham goalkeeper.

A hand ball in the box resulted in a penalty that Acock put away to put Henley 1-0 up.

There were further chances but none converted including a strike from outside the box from Mike Dowling that went wide.

Player of the match Lunnon, put in a brave challenge to save a goal scoring opportunity but with just minutes of the match remaining Caversham netted an equalising goal.

Trents broke the deadlock with a goal after 17 minutes. The Hawks responded a couple of minutes later when Freddie Formon won the ball and made a run down the right before firing home.

Formon, down the right, sent in a cross from deep in the corner area where Jenson Lea tapped home to make it 2-1.

Just before half time Formon featured again with a cross in to captain Ruben Wallis-Robinson who found the back of the net to make it 3-1. Caversham came out strongly in the second half and the back four of Daniel Flowers, Mike Dowling, Louis Catlin and James Harris were forced to defend well while keeper Max Lunnfon pulled off a string of impressive saves.

The Hawks went down to 10 men and the game became competitive as Caversham used the advantage to pull a goal back in the 55th minute.

Player-of-the-match Acock left players in his wake as he won challenge after challenge and the pressure from Acock and Lea forced a defensive error resulting in an own goal by Caversham to make it 4-2.

Caversham fought back and pulled another goal back with five minutes of the match remaining.