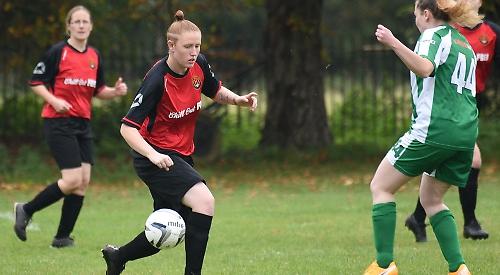 Both teams battled hard with good play early on from Henley with pace on the right wing from Meg James and the left from Gemma Tominey, who sent balls forward to strikers Hannah Palmer and Hill.

The counter attacks from Yateley were often coming from long balls from their own half. Henley’s defensive line up of Lou Colam, Eliza Carpenter and Bex Daly fought hard to keep Yateley at bay with goalkeeper and player-of-the-match Anna West racing off her line on a number of occasions and sustaining an injury to the ribs following a late challenge just before half time.

Late in the first half Henley manager Bryn Shaffner made a series of substitutions. Shelley Strange partnered Palmer to play clever through balls to create several chances while Maria Porterro saw her half volley in the 18 yard box saved by the Yateley keeper.

Henley’s midfield worked tirelessly throughout driven by Betts with Charlotte Currie and Porterro winning back possession to keep Yateley at bay. Play continued at pace with in the second half with Betts, Currie and Jade Price continuing to drive play forwards with Zaya Carter making interceptions on the left.

Yateley matched Henley’s pace with quick attacks from the left and took advantage of a defensive error to go in front on 55 minutes.

Henley continued to battle away as they made a further flurry of substitutions.

The home side eventually equalised on 74 minutes when a corner from Hill curled into the top right hand corner of the Yateley goal. Both sides created further chances with both Hill and Carter going close for Henley.