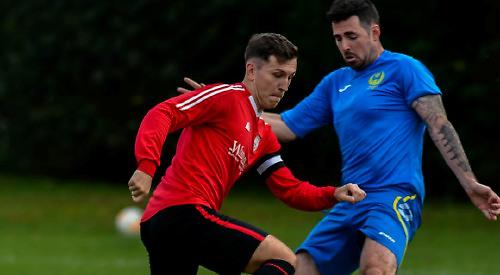 A STOPPAGE time own goal ensured WARGRAVE had the edge in a 13-goal Division 1 thriller at HOLYPORT RESERVES last Saturday.

Holyport raced into a 3-0 lead within 25 minutes, capitalising on individual mistakes from Wargrave whilst the Holyport striker also scored a fine solo effort.

A shell shocked Wargrave tried to fight back but were missing chances until captain Stuart Moss dragged Wargrave back into the game with two goals before Craig Haylett scored his first goal for the club to make it 3-3 at half time.

Five minutes into the second half Wargrave found themselves 5-3 down. The villagers continued to battle away as Haylett added his second and third goals for the club to make it 5-5 before Wild headed home to make it 6-5 to Wargrave with 20 minutes to play.

Wargrave had a player sin binned and had to soak up 10 minutes of pressure with 10 men. With both teams back to 11 players, Holyport equalised with four minutes of the match remaining.

Wargrave pushed for a winner as Wild won a stoppage time penalty which Moss took. The penalty was saved but a Holyport defender ran in to clear the ball and hammered it against his team mates face which caused it to bounce into the top corner and hand Wargrave a 7-6 win.

Elsewhere in the division ROTHERFIELD UNITED went down to a 2-1 defeat away at READING YMCA in a match that saw Ken Clark score for the visitors.

In Division 2 HENLEY TOWN got back to winning ways as they triumphed 4-0 at RICHINGS PARK RESERVES.

Henley went close to scoring when Dan York broke down the right wing and cut inside the box but his effort went just wide of the post.

The visitors kept pressing and were rewarded when a Fred Kirby through ball found Sema Kakembo who broke clear and cooly slotted it past the keeper to give the visitors the lead. Henley started to dominate the midfield with strong running from Kirby, Jimmy Maudlin and Jake Jones who read the game well.

Henley went 2-0 up when Alberto Gingell was brought down on the edge of the box and when his free kick could not be held by the goalkeeper Kirby was first to pounce on the loose ball to tap home.

The second half started with several chances for Richings Park but the back four of Henley held firm all afternoon and limited the home side to a minimum of chances.

Henley put the game to bed when a Jones through ball was latched onto by Charlie Douglas who outpaced the centre backs to score.

Henley netted their fourth goal when good pressing work from Harri Douglas forced the defenders into an error before tapping home.

Elsewhere in the division GORING UNITED ran out 3-1 winners at home against PHOENIX OLD BOYS.

After three minutes Josh Monk controlled a loose ball and hit an unstoppable shot past the helpless keeper from 22 yards to give Goring the lead.

Playing down the slope Goring dominated play and set up several good chances before an inswinging Matt Hayden corner was headed home at the far post by Harry Voice.

Hayden was denied by a fine save following good work by Monk. The home side ensured a 3-0 half time lead when Josh Stevens burst clear on the left before laying the ball into the path of Monk who converted with the outside of his right foot.

With the hill now in their favour Phoenix came back well after half time as both sides created chances but the visitors were denied twice by good blocks from home keeper Andrew Symonds.

With three minutes remaining, Symonds made another good stop low to his left but the ball was forced home by an incoming forward.

HAMBLEDEN made it two wins on the spin as they ran out comfortable 5-0 winners at TAPLOW UNITED RESERVES.

Liam Painter went close to opening the scoring for the visitors early on before setting up the first goal soon after when his through ball found Gabriel Pinot who rounded the home goalkeeper before scoring.

Lewis Drake hit the post soon after while Alex Harris White saw his header hit the post and stop on the goal line before being cleared.

Hambleden went 2-0 up just before half-time when Pinto beat three players down the left wing before squaring to Nick Holzer in the box to score.

In the second half Pinto went on another run down the wing before crossing to an unmarked Holzer who put away his second of the game to make it 3-0.

Hambleden went 4-0 up when Painter scored from the rebound from his own free kick.

The visitors then used all five substitutes before wrapping up the scoring. Rowan Stacey found space and ran through on goal before seeing his shot come off a defender and beat the home goalkeeper.

Elsewhere in the division GORING UNITED RESERVES went down to a 3-1 defeat at AFC WINKFIELD with Robert Ellington scoring for the visitors.

HENLEY TOWN DEVELOPMENT won their first Division 4 match of the campaign as they defeated FARNHAM ROYAL MAVERICKS 6-4 at the Triangle Ground.

William Churchward netted twice while William Jaycock, Alex Lee, Harry Geyton and Henry O’Brien were also on target for the home side.