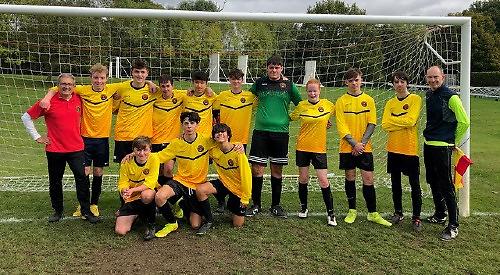 AFC HENLEY HOTSPURS U16s couldn’t maintain their winning streak on Saturday as they went down to a 4-1 defeat at home against CAVERSHAM KNIGHTS U16s.

Although the opening 10 minutes favoured the home team, two goals in the space of as many minutes put Caversham in the driving seat and they scored a third in the 35th minute giving them a 3-0 lead at half time. The Hotspurs played better in the second half, Fin Flood scoring his seventh goal of the season in the 56th minute to set-up the fight back, but despite continued pressure the hosts couldn’t find the net with both Tom Horsley and Freddie Nicholson coming close.

With the Hotspurs pushing forward, Caversham were able to take advantage and scored a fourth and the game played out with no more goals.