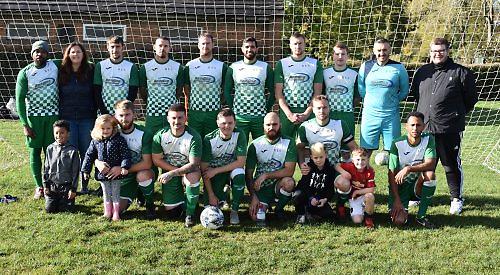 EMMER GREEN continued their unbeaten start to the season with victory in their home Senior Division clash against a hard working HENLEY TOWN side.

The opening exchanges were dominated by Emmer Green and they took the lead when Lorenzo Medford set up James Bozarth. Medford pulled the ball back calmly for Bozarth to smash home from inside the penalty area.

Henley had to be resolute as Emmer Green were passing the ball well and it was thanks to Matthew Balchin, Alex Walmsley, Mike Gee and Arran Finch that the visitors managed to not concede another goal.

Emmer Green’s day was made more difficult when they were reduced to 10 men midway through the first half when goalkeeper Phil Brown reacted to a challenge and the referee showed him the red card.

Emmer Green remained defensively solid with stand in goalkeeper Mark Froude making a number of claims from balls into the box.

Henley’s first chance of the second half fell to Charlie York who hit a volley just wide of the post.

The visitors had another opportunity when Arran Finch almost converted a Tom Essam long throw-in with 10 minutes left to play.

Midfielder Jake Jones did well to set up a chance for the visitors when he made a run down the wing beating a couple of home defenders before squaring the ball but no one was on hand to score.

Emmer Green doubled their lead soon after when Luke Potter chased down a lost cause resulting in an own goal. Mortimer responded well after half time and scored twice from corners in quick succession.

Mortimer, now with the momentum, added a third goal on the counter to complete an impressive turnaround. With Emmer Green chasing the game, Mortimer added two further goals late on.

GORING UNITED ran out 3-2 winners in their Division 3 home clash with READING WEST.

The hosts started the game at a fast pace and after five minutes Matthew Hayden played a good through ball that split the defence and Ollie Pluck was able to convert from the edge of the 18-yard box. Five minutes later Goring scored again, this time George Scoffham was the provider and Dan Wallace finished off the move.

Another fast move from Goring 15 minutes later led to a Dan Wallace cross which was deflected in for an own goal.

Reading West dominated for the remainder of the game, scoring two quick goals in the second half.