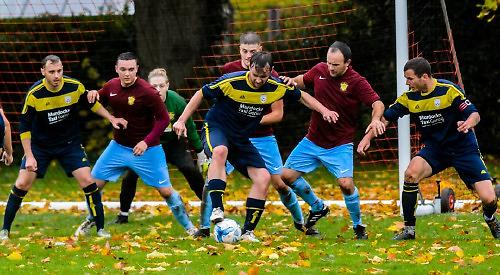 ROTHERFIELD UNITED put in a solid performance as they ran out 2-0 winners at home against Division 1 newcomers HOLYPORT RESERVES last Saturday.

The opening goal came midway through the first half when the windy conditions made it difficult for Holyport’s defence to cope with high balls into the box and Kane Bateman’s swirling free kick eluded the helpless goalkeeper to find the top corner.

Rotherfield continued to dominate after the half-time break and got the much needed cushion 10 minutes into the second half. Captain Aaron Attfield raced on to Bailey Fullbrook’s through-ball then chipped the keeper to cap a fine individual performance.

Phoenix had the first chance of the game when a cross found its way to their striker but Henley goalkeeper George Allen managed to push his effort out.

Henley started to get a foothold in the game and found the opening goal when Johnathan Manuel Duarte’s well placed cross was met by the head of Sema Kakembo at the back post to give Henley the lead.

Henley doubled their advantage when a Jake Jones through ball was latched on to by Fred Kirby who made no mistake in scoring with a first time shot.

In the second half Sam Earl scored with a 25-yard shot into the top left hand corner to make it 3-0.

Henley came close to a fourth moments after when a Charlie Douglas overhead kick was saved well by the Phoenix goalkeeper. The hosts made it 4-0 when Alberto Gingell and Kirby linked up well with Gingell supplying the finish with a well placed low shot.

Henley made it 5-0 when captain Michael Gee scored a free kick from 35 yards out into the top left corner.

Elsewhere in the division GORING UNITED slipped to their first defeat of the season as they lost 3-0 at MAIDENHEAD TOWN RESERVES.

Two injuries in the first 13 minutes to Tom Heslop and Mike Holloway meant the early introduction of Harry Voice and George Scoffham. Voice quickly had a good chance which the keeper easily saved.

Josh Stevens failed to convert a back post half volley before Maidenhead split the United defence leaving a simple chance that was hammered home. A second goal soon followed leaving Goring a difficult second half challenge.

A defensive error allowed Maidenhead a third goal before substitute George O’Brien injected some much needed energy as Ed Ardill and Matt Ploszynski both went close for United..

HAMBLEDEN maintained their 100 per cent start to the Division 3 season as they defeated ROBERTSWOOD 3-1 at The Dene.

Due to several players being unavailable Hambleden fielded a new look defence and got off to a perfect start as they went ahead after just two minutes played. Nick Holzer found space on the left and slotted the ball through to Lewis Drake who fired home with a first time shot.

The visitors hit back but the Hambleden defence held firm. Just before half time Gabriel Pinto had a shot well saved by the Robertswood goalkeeper. Kicking down the slope in the second half Hambleden increased their lead when Gabriel Pinto cut in from the left and was pulled down in the penalty area. Liam Painter tucked away the resulting spot kick.

Robertswood pulled a goal back when a long throw into the box was inadvertently headed home by Matthew Byrne for an own goal. Hambleden wrapped up the scoring when Holzer cut into the box from the left hand side before firing home.

Robertswood came back again and had the ball in the area only for their resulting shot to be well saved by Manuel Pinto. With time running out the visitors had a goal disallowed.

Elsewhere in the division GORING UNITED RESERVES recorded their first win of the season in emphatic style as they thrashed TAPLOW UNITED RESERVES 8-1. Tristan Allen netted a hat-trick, Joshua Wiltshire scored a brace whilst there were also goals for Oliver Pluck, Javier Corral and Patrick Dyer for the hosts.

HENLEY TOWN RESERVES maintained their unbeaten start to their Division 4 campaign as they drew 4-4 at BURGHFIELD RESERVES. Arran Finch netted twice whilst Mike Classen and William Jaycock were also on target for the visitors.