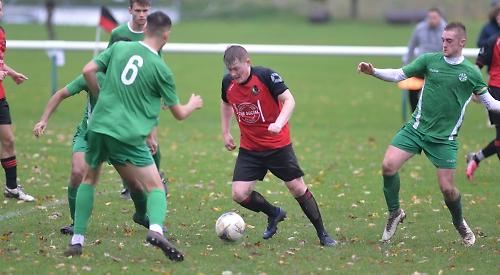 In wet and windy conditions the visitors started brightly with their left winger causing problems but never really testing Charles Selwood in the Watlington goal.

The visitors went ahead after 18 minutes when a shot came back off Selwood’s knees for the striker to slot home from close range.

The game became scrappy until Selwood gathered a loose ball and from his kick Tyler Sims beat the defender to the ball and lofted it over the oncoming keeper to make it 1-1.

Eight minutes into the second half a defensive clearance was smashed against the Holmer Green forward and spun past Selwood from 20 yards to put the visitors ahead for the second time in the game.

Soon after, the Holmer Green striker had an ambitious effort from 30 yards come back off the bar.

Town dug deep and pulled level on 60 minutes. Sims burst down the left wing and cut the ball back to Jake Braim in the box who turned and fired passed the keeper from eight yards out to make it 2-2.

The home side made several substitutions with Chris Swales replacing Sims and Owen Wood replacing Hudson.

Town were on top now without creating too many chances but were awarded a penalty when the keeper was adjudged to have brought down Adam Holloway in the box on 65 minutes. Holloway stepped up and slotted into the bottom corner to make it 3-2.

The visitors created a late opening but the effort was fired straight at Selwood for a comfortable save.

WOODCOTE posted their first Division South points of the season as they defeated visitors CLANFIELD DEVELOPMENT 5-4 in a topsy-turvy game.

The home side conceded an early goal with the youthful Clanfield side dominating early possession. Woodcote clawed their way back into contention and created a couple of chances, Daniel Boateng hitting the post and Jake Dillon failing to hit the target from a James Worsfold pass.

There was an anxious moment when the ball drifted over Ben Lallament, but the keeper recovered well to pounce on it as it looked destined for the net.

The equaliser came on 35 minutes when Rafa Brandao pounced to convert Boateng’s cross from close-range.

In less than a minute it was 2-1 to Woodcote and Brandao had doubled his tally as he rifled home an unstoppable shot after the Clanfield defence had failed to clear a free-kick.

As the half came to an end, Woodcote made it 3-1. A swift move turned defence into attack and this time Brandao turned provider as he slipped the ball inside to centre back Alec Curtis who had raced the full length of the field and finished from close range.

The second-half started in explosive fashion with an early fourth goal and Brandao’s hat-trick. His trickery left him in space inside the box and his shot from a narrow angle was hit with such power that the keeper could only push it on to the post and into the net.

This goal seemed to spark new life into the visitors and as the home team tired, they pulled themselves back into the game and with 15 minutes remaining the scores stood at 4-4.

At this stage Clanfield were on the front foot and looked the most likely winners and they were robbed of the lead by a double-save by Lallament.

As the game passed the 80 minute mark it was Woodcote who stole the points. Boateng, having his best game for Woodcote, got to the byline and pulled the ball back, the defence failed to clear and substitute Andy Taylor, coming in from the right, scored with a strike with his left foot into the far top corner.