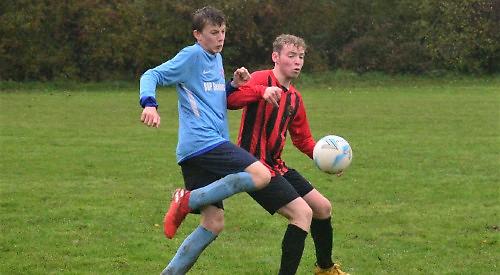 As torrential rain fell on the Harpsden pitch, the Hotspurs pressed immediately from kick-off and in the fourth minute were awarded a penalty for handball, which Finn Flood calmly tucked away into the top right corner.

The Hotspurs continued to pile on the pressure and after 33 minutes Flood scored his second from a tight angle on the right.

Within a minute it was 3-0 when a mix up in the Colts defence resulted in the ball bouncing off Kian Early into the net.

The Hotspurs continued to dominate in the second half and were unlucky when Freddie Nicholson’s free kick from 25 yards hit the bar and Lottie Wilson’s shot from 20 yards was tipped over by the Colts’ keeper.

On 58 minutes Flood completed his hat-trick to make it 4-0, and despite the Colts pushing hard in the last 20 minutes, the Hotspurs defence of William Johnson, Freddie Nicholson, Elodie Brough, James Grant, Jake Heppenstall and keeper Huseyin Tarhan held on for their second clean sheet of the season.

AFC HENLEY HOTSPURS U14s maintained their top of the table position after defeating HEARTS OF TEDDLOTHIAN PUMAS U14s 3-0. The torrential rain and gusty wind made for a slow start for both teams but it was the Pumas who had the first real chance. A free kick from just outside the area required a fine save by captain and goalkeeper Ben Palmer who tipped the shot onto the bar and off for a corner.

The Hotspurs went 1-0 up after a period of sustained pressure with a goal from the edge of the box by Tyler O’Brien.

The Pumas started strong in the second half and had a long period of possession and pressure on the Hotspurs defence, but centre back Max Cranstoun and defensive midfielder Dexter Harris were able to snuff out all chances in the middle of the pitch.

The game was decided in the space of two minutes that started with a goal scored from a shot from the edge of the area by Lucas Hendley to make it 2-0. Shortly after the restart, the Hotspurs pulled together a series of passes, switching play from the right-hand side to the left where O’Brien put Will O’Hagan through on goal to score.

In a keenly contested derby, Rotherfield flooded the midfield early on and looked to hit the Hurricanes on the break. The Hurricanes looked to use the width of the pitch to break down the hosts as Finnbar Scott’s overlapping runs down the left set up some early chances for the visitors.

Tom Bonser was doing the same down the right while man of the match Joe Turner was having a solid game at sweeper.

The early pressure soon told as Henry Mendelssohn picked up Ben Horner’s goal kick in midfield and without having to look up hit a 20 yard through ball to striker Harvey Herbert sold the Rotherfield keeper a dummy before scoring. The Hurricanes then conceded a goal just before half time.

In the second half Rotherfield turned the tables on the Hurricanes as the hosts scored from a corner to take the lead.

Tom Yeoman spotted the run of Christian Rowbotham down the right channel where he held off the Rotherfield defence before firing home the equaliser.

The Hurricanes had two chances to win the game as first Sam Winters headed just over the top of the bar before Tom Atkinson’s back heel was headed just wide.