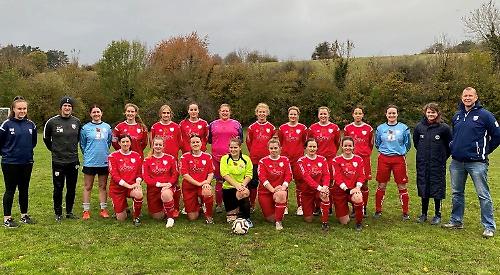 JOSIE MARDEN netted a hat-trick as visitors GORING UNITED ran out comfortable 6-1 winners at AFC HENLEY’S Harpsden ground on Sunday to maintain their challenge for the Development Division title.

The game started evenly with Henley defending in numbers and looking to break when they could and Goring trying to build their attacks through midfield.

Goring went ahead after eight minutes when, after committing players forwards, Harriet Waller picked the ball up in midfield, before releasing Marden in behind the Henley defence who cut across a defender before finishing calmly past the goalkeeper.

The visitors then took more control of the game, with Henley struggling to get out of their half and Goring’s defence tidying up any Henley clearances.

Alice Hutt was distributing the ball well in midfield, and Goring kept the ball with some neat combinations. This led to the second goal, as the ball was played into Waller who scored from 20 yards out.

Goring extended their lead 10 minutes before half time when Charlie Atkins latched onto a bouncing ball, hitting a rasping volley that the goalkeeper did well to get a hand to. The ball came off the inside of the post and despite Henley defenders trying to clear, Grace Dollery was on hand to add the final touch.

Goring made it 4-0 before the break when Marden and Harriet Waller played two one twos, before Waller was put through one on one to score

Henley started the second half brightly keeping play in the Goring half and forcing a corner which saw Hannah Palmer find Jade Price who shot wide. Good passing play between Zaya Carter, Charlotte Currie, Palmer and Price saw Henley breakaway but the move was halted due to an offside decision.

Soon after Henley were awarded a free kick for handball centrally 25 yards from goal. Amy Betts stepped up and managed to score, firing over the wall and the ball dipping in just below the crossbar.

Henley gained confidence from that goal and Goring had to be on their toes to keep the score from becoming even closer, with the defence of Alex Llewellyn, Iona Bielby, Sophie Turnbull and Beth Drummond making some timely interceptions and challenges.

Goring were able to rally from this pressure and added their fifth goal of the game when Marden finished well when put through on goal.

Marden made it 6-1 soon after to complete for her second hat-trick in as many weeks as she finished well after some neat interplay in midfield.