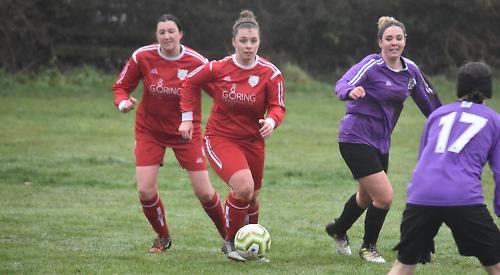 GORING UNITED netted five goals in each half as they thrashed visitors WYCOMBE SAINTS 10-1 in their Development Division clash last Sunday.

The hosts started on the front foot, and despite the pitch not being conducive to a passing game, were able to get the ball down and play well.

Goring were also working extremely hard off the ball and Wycombe found it hard to cope with the intensity of their early play. This led to Harriet Waller scoring three of her four goals in the first 25 minutes of the game.

The first was a first time shot into the roof of the net from a Grace Dollery pass, the second a burst through three Wycombe defenders and a rifled shot into corner and the third a
neat finish after good interplay from a corner by Dollery.

Goring continued to dominate but they were also thankful to player of the match Sophie Turnbull, whose work rate and solid passing ensured that there were few opportunities
for a Wycombe counter attack.

Goring went further ahead before half time through a first-time finish from Dollery from a Josie Marden cross. Marden was rewarded for her hard work, converting a penalty after a hand ball by a Wycombe player in the box to make it 5-0.

Goring made it 6-0 early in the second half with a flowing move, involving crisp passing and movement, ending with Dollery scoring her second of the match, tapping in a ball at the far post after a
pass across goal from Marden.

Louise Axon got on the scoresheet with a 19-minute hat-trick, the first a strong shot from the edge of the area, the second a left footed shot from the left side of the area into the bottom corner, and the third from a penalty after another handball.

Wycombe continued to work hard and netted a consolation goal, scoring a follow up after a good save by Hannah Weller.

The scoring was complete after Waller came back on, drove inside, and finished with a fierce left footed drive that beat the goalkeeper for speed and power low into the goal for her fourth and Goring’s 10th of the game.