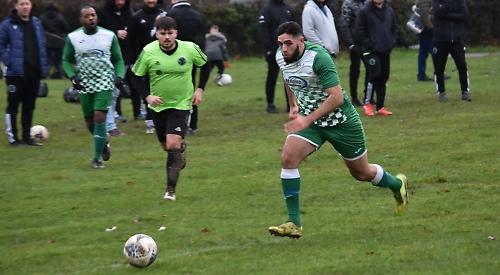 In their last home game of the year Emmer Green looked in control throughout and went ahead early with inform striker James Bozarth getting on the end of a Lorenzo Medford cross.

Medford was the provider again for the second goal hitting a good ball in to find Ashley Searle at the back post who finished with a header.

Bozarth grabbed his second of the game to put Emmer Green 3-0 up and Medford got on the scoresheet himself to make it 4-0 at half time.

The visitors got a quick goal back after the restart but it wasn’t long before the hosts found the net again as a through ball from Jordan Cox found his midfield partner Daniel Donegan who finished well.

Searle secured his brace, slotting home Jamie Piercy’s pass to make it 6-1 and just before the final whistle Loxwood pulled another one back after when Emmer Green lost their concentration at the back.

Elsewhere in the division HENLEY TOWN’S match at TILEHURST YM was postponed as was EMMER GREEN RESERVES’ Division 1 clash at CAVERSHAM AFC.

In Division 3 league leaders GORING UNITED dropped their first points of the season as they were held to a 1-1 draw at home against SANCTUARY STRIKERS.

The game started at a fast pace, with Goring having most of the chances but they were unable to convert.

The second half started with a period of domination from the away side which they capitalised on after a series of defensive mistakes.

Following a good save from Andrew Symonds to keep it at 1-0 Goring battled their way back into the game and their persistent attacking was rewarded when Jake Turnbull was taken down in the penalty box. Tom Brownlow stepped up and converted from the spot.