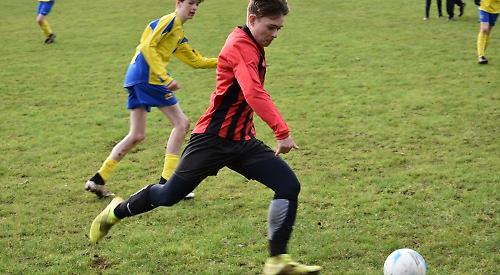 Ascot started the game brightly and were 2-0 up after 20 minutes with two long-range shots that gave the Hotspurs’ keeper, Huseyin Tarhan, no chance.

The Hotspurs finally found their rhythm towards the end of the first half when Benny Wood hit the crossbar and the loose ball fell to Tom Horsley who put in a cross for Finn Flood to head into the top corner.

Henley were a different team in the second half and soon made it 2-2 after Flood won the ball on the byline and crossed for Felix Wilson to slot home.

On 64th minutes the Hotspurs took the lead when Wood picked up the ball on the halfway line and went on a run — dribbling through most of the Ascot team — before putting in a cross for Wilson to score his second.

The Hotspurs looked likely to take all three points but Ascot scored an equaliser on the break and, despite pressure from the hosts, the game finished all square.

AFC HENLEY HURRICANES U14s ran out 3-1 winners at ASCOT U14s to move up to fourth place in their division.

In what was a tight match the visitors started brightly. A long ball from the back by Joe Turner seemed to have been dealt with by the Ascot defence as the ball was passed back to the keeper. However, an ever alert Harvey Herbert saw the pass fall short and he tackled the keeper and saw the ball balloon into the air where he was fastest to react as he coolly let the ball drop before slipping it into the net despite a desperate goal line clearance by an Ascot defender.

Tom Atkinson broke from midfield and let fly from 20 yards out only to see his effort well saved by the Ascot keeper as the Hurricanes went into half-time 1-0 to the good.

Ascot equalised early in the second half and it took a fine save by keeper Ben Horner to keep the scores level. This was to be the turning point of the game as the Hurricanes pushed on for the three points.

Sam Archibald broke down the left and after some good interplay with Christian Rowbotham slipped the ball to Joe Winpenny who in turn passed to Jasper Quinnell who hit a half volley that looked destined for the bottom left of the goal before an Ascot defender got a block on it.

Striker Rowbotham then found the back of the net as he curled an accurate effort into the bottom right corner to put Henley 2-1 up.

Man of the match Tom Yeoman performed well in midfield while centre back partner and sweeper Joe Turner also had a good game.

Oliver Saunders, playing in a holding midfield role, was able to dictate the play and set up the Hurricanes’ attacks whilst affording the back line a protective shield.

In the dying minutes Herbert was fouled in the Ascot penalty area and he dusted himself off before firing the penalty into the bottom corner of the net to make it 3-1.