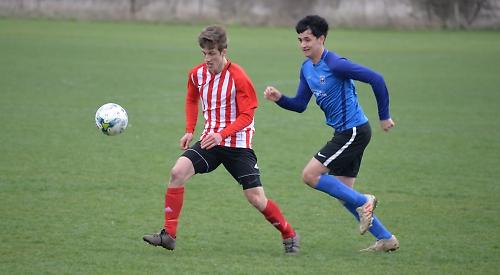 Sam Wild netted twice for the hosts whilst Stuart Moss and Joseph Danelian were also on target.

The only setback for the villagers was the sending off of Danelian in the second half.

HENLEY TOWN went top of Division 2 despite being held to a 4-4 draw at DATCHET.

The home side started brightly and almost took the lead in the opening seconds but were foiled by a smart save from George Allen.

Henley took the lead when Jack Woodley outpaced a Datchet defender and put a low cross into the box which was met by Dan York who made no mistake from close range.

Town were awarded a penalty when Fred Kirby was tripped by a Datchet defender. Kirby stepped up and fired home into the top left corner.

Henley made it 3-0 when Alberto Gingell passed the ball to Jack Woodley’s feet in the box where he turned smartly and placed his low shot into the bottom corner.

The visitors were pegged back when Datchet were awarded a penalty which was converted to make it 3-1.

Henley made it 4-1 when Woodley made a run down the right wing and supplied a cross to Kirby who again finished well with a right footed shot into the bottom corner.

Henley conceded a second goal when they failed to clear from a corner and the ball was tapped in by a Datchet player.

Datchet reduced the arrears to just one goal when the ball was bundled into the net with the referee waving away Henley appeals for handball.

Henley were on the back foot for the final five minutes and eventually conceded the equalising goal from a corner.

Elsewhere in the division GORING UNITED went down to a 2-0 defeat at BERKS COUNTY RESERVES.

The game was a close affair throughout with neither team creating many chances in a tight first half. Shortly after half time George Scoffham was unfortunate not to break the deadlock with a fiercely struck effort that hit the corner of the post and crossbar.

Shortly afterwards a defensive error allowed the Berks County right winger to fire in a cross that Tom Canning was only able to deflect onto the head of a forward who scored from close range.

Worse was to follow soon after when no Goring player reacted to a bouncing ball in the area that was easily converted. Goring tried hard to get back into the game but never troubled the opposition keeper.

In Division 3 HAMBLEDEN put in a good defensive display as they ran out 3-0 winners at ROBERTSWOOD.

The visitors almost took the lead when Lewis Drake hit the post midway through teh first half.

Soon after Hambleden took the lead when a Liam Painter corner was parried away on the goal line only for Alex Harris White to tap the ball home.

The centre back pairing of Henry Arthur and Harris White kept the hosts at bay whilst at the other end of the pitch Gabriel Pinto saw his shot go narrowly wide. Hambleden started the second half brightly and made it 2-0 on the hour mark when another Painter corner was fired home by Richard Vallis.

The visitors had to reshuffle their team after picking up a couple of injuries but made it 3-0 with the goal of the game. Painter won the ball in midfield before nutmegging a defender and scoring via the post for a fine individual goal.

The last 10 minutes of the match saw the home side have the better of the play but they were denied several times by Hambleden goalkeeper Lucas Romero Jinks.

• THE previous midweek saw a HAMBLEDEN side go down to a 3-2 friendly defeat at PENN AND TYLERS GREEN.

Richard Vallis and Nick Holzer put the visitors 2-0 up in the first half.

Several changes to the visitors’ team disrupted their flow of play as the home side fought back to win with an own goal, penalty and free kick.