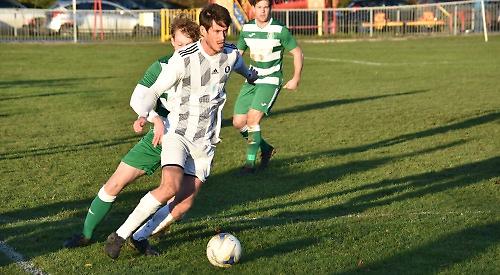 The visitors started brightly and almost took the lead within the first 10 minutes with two chances falling to Adam Holloway, who with the help of a bobble failed to test the keeper while Kevin Hudson hit the post from close range.

Town took the lead after 20 minutes when Martin Williams played a one two with Holloway and his shot from the edge of the box took a deflection to loop over the outstretched keeper.

Town started the second half the stronger and found themselves 2-0 up when Holloway was tripped in the box after latching on to a Kevin Hudson crossfield through ball. Holloway tucked away the resulting spot kick.

Chinnor were getting more possession but were hit on the break with Chris Witchel and Holloway linking up down the left and the latter calmly finishing to make it 3-0.

Curtis Lockyer almost made it 4-0 when he latched on to a loose ball and rounded the keeper but his effort went wide of the post.

With 20 minutes to play Chinnor started to throw numbers forward and pulled a goal back when their striker broke free.

Chinnor made it 3-2 with 10 minutes of the match remaining when a cross-cum-shot looped over Ben Little into the far top corner of the goal. Town were reduced to 10 men for the remainder of the match as Jon Little was sin binned.

The momentum was now with Chinnor who saw a close range effor go narrowly wide of the post.

Chinnor had several ccorners and free kicks in quick succession but the Town rearguard kept them at bay.

With time running out Town substitute Owen Wood got hold of a loose ball just inside the Chinnor half, took one touch then from 45 yards saw the keeper well off his line and lobbed the ball into the empty net to complete the scoreline.

WOODCOTE, playing their first Division 2 South match since October, put in their best performance of the campaign to hold unbeaten
visitors WANTAGE TOWN DEVELOPMENT to a 3-3 draw.

Wantage took the lead on 15 minutes when the home defence was caught square and a forward was able to choose his spot to beat Woodcote keeper Rob Cadle.

Woodcote y equalised on the half-hour mark through a good strike from Daniel Boateng.

Wantage restored their lead on 35 minutes with a scrambled goal after Rob Cadle had only managed to parry the first shot. Woodcote almost equalised just before the break but Tommy Chapman’s lob, after a weak punch by the keeper, went narrowly over the bar and almost on half-time Alec Curtis saw his header go narrowly wide.

Woodcote started the second-half with all guns blazing, though Cadle had to make pull off a fine save in a rare Wantage attack.

The home team’s pressure paid off after 65 minutes when Daniel Boateng put them back on level terms. The tricky midfielder hit the post with his first effort but was first to the rebound to fire home. At this point, Woodcote were dominant and they took the lead on 75 minutes when a cross from Frank Dillon was headed back by twin brother Jake for skipper Tommy Chapman to score.

Woodcote looked good for the win until the 90th minute when they conceded a free-kick 30 yards out. The ball was launched into the box, Cadle came to punch, but it glanced off a Wantage head and looped into the net.

There were some anxious moments for both teams as the referee played five minutes of added time but neither side was able to create an opening.