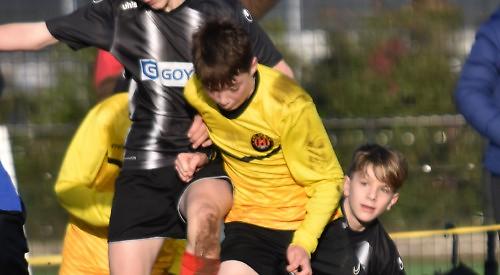 In a replay of the EBFA Division 1 Cup final postponed during the first coronavirus lockdown , it was the Hurricanes, buoyed by a boisterous home contingent, who started the brighter.

Herbert was on fire and wasted no time in stretching his legs away from the Maidenhead keeper who had no choice but to bring him down with the goal gaping.

Then, for the second week running, he dispatched the penalty to give the Hurricanes an early lead. But Maidenhead, who had not been beaten in 2020, responded well. A run down the right resulted in a far post cross that was headed into the back of the net to make it 1-1.

Ben Horner was now the busier keeper and he had to pull off several good saves to keep the scores level. He was ably assisted by Matthew Dippenaar, who was having another great game at fullback, making crucial interceptions and well-timed tackles.

Maidenhead were now on a roll and took the lead just before half-time, thumping the ball into the net after the Hurricanes missed ample opportunities to clear their lines.

At the break, it looked as though Maidenhead would be recording their 19th consecutive victory as they led 2-1 and appeared full of confidence.

But the Henley management team were not flustered as they knew there was strength in reserve and their side went back on to the pitch with words of encouragement ringing in their ears.

Key to the comeback was the midfield trio of Tom Yeoman, Joe Turner and Max Stokes who gave Maidenhead no time on the ball in the middle of the park.

They were particularly good at locking down Maidenhead’s dangerous number 11 and, having won the ball back, they were then alert enough to release the dangerous Hurricanes’ attack.

Tom Bonser has had a very progressive season at right back and was on the charge down the right side before cutting the ball back for Sam Winters, who made no mistake from 10 yards.

The hosts were then slightly unlucky to find themselves behind again as a deflected shot left them 3-2 down.

Hurricanes’ captain Oliver Saunders gave his best performance of the season at left back as he encouraged the team to keep at it. His long clearances were also beneficial in clearing their lines. Luca Thomson was an invaluable asset at centre back with his physicality in the tackle and sheer strength against opponents making him difficult to pass.

Henry Mendelssohn was next to assist Herbert as Mendelssohn carved his way down the right with a mazey run, leaving Maidenhead defenders in his wake.

He then squared the ball for Herbert who placed the ball calmly into the net to get the scores level again.

The Hurricanes were not going to give the supporters an easy ride though and a controversially awarded penalty allowed Maidenhead to go in front again.

Sam Archibald responded brilliantly, playing a lovely one-two with Herbert who left the visiting keeper grappling at thin air as the Hurricanes hauled themselves level at 4-4.

The game was up for grabs now and Herbert was in no mood to let the match slip from his grasp. He set off on a glorious solo run from his own half before letting fly from 30 yards.

The ball soared into the top-right corner of the goal as the Hurricanes went into the lead in what was to prove a decisive move. The Hurricanes were now well on top as Tom Atkinson let fly from 20 yards and Christian Rowbotham was unlucky to see a shot fly wide as the hosts tried to put the match to bed.

This was left to Herbert, who notched his fifth goal of the game after good work by Rowbotham down the right gave Herbert a tap-in from close range.

The 6-4 scoreline was not flattering on the Hurricanes as they ended the game well on top with a performance full of character and inspirational play.

AFC HENLEY HARRIERS U14s lost out 3-1 to the WHITE KNIGHT WIZARDS U14s in a game that was played on a soggy pitch following torrential overnight rain.

The Wizards got off to a great start and, after pressuring the Henley goal, scored with a shot across Dom Brown into the far corner. Rory Pearson and Vibhu Vadhoolan made some important blocks before a skilful dribble by the Wizards’ number 19 caused mayhem and resulted in a
2-0 lead.

The Harriers started to get a foot in the game and made some great challenges in midfield with Max Messias and Calvin Henry giving their all.

With Daniel Lennon playing well on the wing, the Henley boys went in at half-time with more confidence.

With a change in goal to Flavio Merennage and Brown and Max Messias joining Will Tebbutt in defence, the fightback began.

The second half was a reversal of performance, with the captain Archie Croft joining the skilful Charlie Hughes up front.

With great support from Lennon, the Harriers created several chances but were denied by an outstanding performance from the Wizards’ keeper.

Some brilliant saves by Merennage and last-ditch tackling from Brown and Pearson and skill from Tebbutt and Messias kept Henley in the game.

Finally, after great work in midfield by Henley, the Harriers got back into the game.

• WATLINGTON RESERVES notched their 10th victory of the season with a 3-1 away win at STANFORD-IN-THE-VALE on Saturday in Division 2 of the North Berks League.

Two goals from Brandon Burton and a Tom King strike put Town 3-0 up at half-time.

After the restart, Stanford pulled back a consolation goal. King, who was playing his first match of the season, was awarded man-of-the-match.