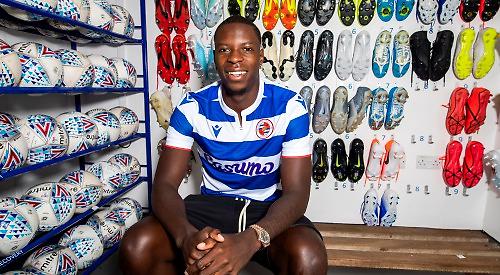 READING manager Veljko Paunovic felt his side were lucky not to concede in the opening stages of their 3-0 victory over Coventry on Tuesday night.

In the end Lucas Joao and John Swift each produced a goal and an assist as the Royals attacking firepower proved too much for 10-man Sky Blues.

Coventry started the stronger of the two sides at the Madejski Stadium, but Callum O’Hare’s low shot hardly troubled the keeper while Leo Ostigard glanced a free header wide.

Joao then held off a defender to notch his 17th goal of the season and put the hosts ahead. From then on Reading were rarely troubled.

“I wasn’t entirely happy how we started the game. We conceded some unforced mistakes and gave Coventry some opportunities. That could have cost us much more.

“The reaction was our first goal. Great play, a great pass, from Swift to Joao and he produced his usual way of scoring goals. We got where we wanted to be. We had the lead, which was very important to us.”

Joao’s opener saw him take Swift’s lofted through ball on his chest before showing strength to ease Dominic Hyam out of the way and finishing.

After going in front, the Royals took control of the game with Ovie Ejaria hitting the post after a dribble that took him past four players and Portugal striker Joao diverting a cross from Tom Holmes wide of the goal.

Andy Rinomhota doubled Reading’s lead after the half-time break with a drilled effort from just outside the box from Joao’s lay-off. It was his 100th appearance for the Royals.

Ostigard went close with two headers for Coventry but Kyle McFadzean’s sending off for two yellow cards halted their momentum.

The subsequent free-kick was taken by Swift who wrapped-up the win for Reading with a dipping 30-yard strike.

Reading should have had a fourth, with substitute Sam Baldock shooting just wide after sprinting through on goal, while Max Biamou headed against the post as Coventry chased a consolation.

Michael Olise was forced off with a shoulder injury just after the hour mark but that was the only dampener on an exciting display by the hosts.

Ejaria also drew a foul from McFadzean which saw the visiting skipper dismissed and Swift’s powerful free-kick past Ben Wilson was to be his last touch before being replaced.

Victory moved Reading above Brentford and Bournemouth into fourth place and to within three points of an automatic promotion spot.

On Sunday, Reading travel to Preston in the Championship, kick-off 12.30pm.