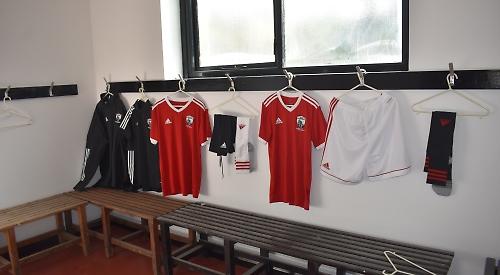 PLAYERS and committee members at Henley Town FC have been putting the finishing touches to a refurbishment.

The clubhouse, changing rooms and toilet facilities at the Triangle ground off Mill Lane have been given a facelift during the three coronavirus lockdowns in the past year.

Henley, nicknamed the Red Kites, are now all set for the resumption of the Thames Valley League, which was confirmed following a meeting of clubs on Tuesday night.

The first set of fixtures will be played on April 10 and will run until June 26 with the possibility of midweek games to ensure as many are played as possible.

Teams will not be penalised financially for pulling out of games but points will still be awarded. There will be no automatic relegations but there will still be a winner and runner-up in each division.

Players will be able to start training again from March 29, subject to the Government easing its coronavirus restrictions.

Henley currently sit at the top of Division 2 with three wins, a draw and a defeat from their opening five matches. Goring United are a point behind in second place. Henley Town Development, the club’s reserves side, are currently second in Division 4 with eight points after two wins and two draws in their first four games.

Club chairman Michael Keane said the players were keen to be back out on the pitch playing again.

He said: “I have been saying that I would like to see the season go ahead and if you ask any player if they would want to get back playing they would say they would. I know our players are chomping at the bit to get back out there.

“But not all the teams may be able to have the players or pitches to play so I am not sure, looking at the bigger picture, just how many fixtures will be fulfilled.” Mr Keane said that the club had been planning to resurrect the Henley Town & Comrades Cup and stage a friendly competition if it was decided that the league would be null and void this season.

He said that in years gone by it was played among local teams such as Highmoor and Shiplake and if it was brought back it would be an eight-team invitational tournament.

In the meantime, the club has been working hard to get the pitch and facilities in the best condition.

Mr Keane, who lives in The Close, Henley, said: “We have already started our grass-cutting programme and strimming around the pitch to get it into the best condition for football to restart.

“We are fortunate in that we have our own pitch rather than it being shared or owned by a local
council.”

The three coronavirus lockdowns in the past year have given the club the opportunity to update its facilities using grant money of £2,500 from Henley Town Council.

Mr Keane said: “Since the summer we have been using the lockdowns to refurbish and redecorate. We have new tiles and showers in the changing rooms and updated the toilets as well. There was actually a collapsed drain in the gents so that had to be rebuilt and redecorated.

“We have also been up in the loft rewiring and have spent a lot of money on that. The next step is to redo the bar area for the time when we can welcome people inside the clubhouse again. We have actually brought forward some of the work which otherwise would have been done in May or June.”

Mr Keane said the club had managed to do more with less because of the work of volunteers and he hopes the improvements will attract more business sponsorship as well as private individuals wanting to hire the facilities.

He said: “Ninety per cent of the work was done voluntarily. This time next year we hope to be in a far better place with the clubhouse looking clean and tidy and can get some more money coming in and hopefully that can also attract more business interest as they can see we are doing things in the right way.”