Woodley scores brace as side keep noses in front 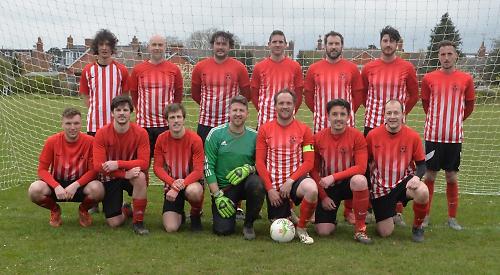 ROTHERFIELD UNITED picked up two score draws in their first fixtures since the return of the Thames Valley Premier League after coronavirus lockdown restrictions were eased.

In Division 1, they played out a 1-1 draw away at SLOUGH HEATING LAURENCIANS on Saturday before being held to a 2-2 draw at home to ELDON CELTIC on Monday.

Elsewhere in the division leaders WARGRAVE returned to league action with a convincing 3-0 win over MORTIMER RESERVES on Saturday.

The opening exchanges were fairly even but Goring looked the more dangerous side. They had an early chance to take the lead when Josh Monk made space for a shot but it lacked the power to beat the Hurst goalkeeper.

However, a goal soon followed when a Matt Hayden corner was partially cleared and the ball fell to Ed Ardill whose delivery into the box was slammed home by Voice.

Hurst then hit the outside of the post with a headed chance before Goring spurned a chance to double their lead. Voice was bundled over in the penalty area but Hayden’s well struck penalty clipped the top of the bar.

The visitors went close again when a 20-yard free-kick rebounded off the bar before Goring capitalised on the loose ball when Hurst failed to clear a Hayden free-kick. This allowed Voice to fire home from eight yards to double the lead before the break.

Goring’s defence were rarely troubled during the second half with James Williams in commanding form. Josh Stevens was unlucky when the goalkeeper made a good double save but the hosts failed to add to their lead despite creating several chances. Elsewhere, visitors
HENLEY TOWN thrashed TWYFORD AND RUSCOMBE 5-1 with Jack Woodley scoring twice.

The match started slowly with Twyford forcing a few corners but livened up when Henley’s Harry Geyton broke the deadlock with a strong touch and finish.

Woodley soon doubled the lead when he met an Alberto Gingell cross and the score stayed the same going into half-time.

Henley missed a few clear cut chances soon after the restart until Woodley stroked home his second to make it 3-0.

Twyford replied swiftly with a penalty kick after a push in the box, although Henley hit back again with goals from Jake Jones and Dan York. Henley remain top of the league by three points.

In Division 3, hosts HAMBLEDEN defeated WHITE EAGLES 4-0 in their first competitive fixture since the season restarted.

Hambleden were very disorganised during the first half but were unlucky not to score when Liam Painter and Rowan Stacey both hit shots against the goalposts.

The hosts did eventually score with a cross from Stacey found Lewis Drake, who side-footed the ball past the goalkeeper to go in a goal up at the break.

Hambleden rung the changes at half-time, with Gabriel Pinto and Toby Nethercot entering the fray.

The hosts then won a free-kick when Drake was brought down and he got up to take it and scored from about 30 yards out.

Hambleden were looking comfortable with Manuel Pinto in their goal having little to do.

Then, with 20 minutes left, Craig Trimmings and Dudley Powell were brought on. Trimmings scored the third goal with a 20-yard shot after Johnny Openshaw headed the ball back into the opposition box.

In Division 4, HENLEY TOWN DEVELOPMENT lost out 3-1 at home to BERKS COUNTY ROVERS with Freddie Kirby grabbing the consolation goal.

Grace Dollery scored twice while Alison Hannigan, Josie Marden, Charlie Atkins and Harriet Wallers all chipped in with a goal each.