Old bus shelter given to football club for use as dugout 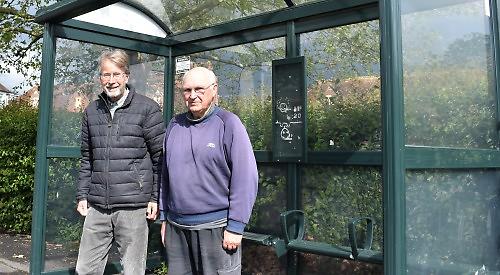 A DISUSED bus shelter in Henley is to become a football team’s dugout.

AFC Henley, which runs youth teams, has been given the shelter in Western Avenue by the town council free of charge.

The club intends to put it on the touchline of the 11-a-side pitch off Reading Road to use as a dugout.

The Henley town bus service stopped using the shelter in 2018 when Reading Buses took over the service from Whites Coaches.

Last year, the then mayor Ken Arlett asked the club if it would be interested in having the shelter instead of it being put into storage.

Club chairman Trevor Howell said: “We said it was a no-brainer. On the basis that the bus route had changed, the shelter wasn’t going to do anything else. We came to have a look and thought it looked like a nice shelter.

“We’re very pleased to have it and grateful to the council for thinking of us.

“The only problem for us is where to put it. Our largest pitch is right next to the AstroTurf and normally we have coaches and spectators on different sides. If it was put on the other side, it might get vandalised so we thought it might be better to back it on to the AstroTurf fence and make it into a mini grandstand.

“It might be that the coaches prefer to have it on the other side, so it is something we will have to talk about. Sometimes you find uses for things you never thought of.

“My only potential concern would be vandalism because we do get people climbing into our grounds.”

Head groundsman John Hooper, who is also a town councillor, said: “This is a nice gift, It will certainly do a good job at keeping the kit dry on a bad day. It also has space for a noticeboard. If you put it into storage it would just become dilapidated.”

The council will pay £875 to have the shelter uprooted from its concrete base and moved to its new home. This will take six to seven weeks.

Reading Buses gave up the bus service contract in April 2020 and were replaced by TK Travel, of Burghfield, in October.

AFC Henley has teams from under-eight to under-18s as well as a women’s side.