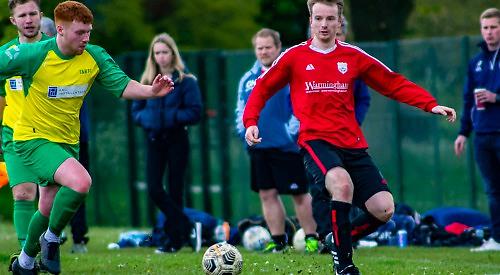 HENLEY TOWN remain top of Division 2 despite going down to a 2-1 defeat at MAIDENHEAD TOWN RESERVES last Saturday.

The game started evenly with neither team threatening the opposing goalkeepers for the first 20 minutes.

Maidenhead took the lead after 25 minutes when their striker managed to get a shot away from a tight angle with the ball just squeezing inside the right post.

Henley almost equalised straight away when a Jake Jones corner was met by Alex Walmsley whose header clipped the top of the crossbar.

Henley started the second half well with some neat football but couldn’t create a clear cut chance.

The hosts’ dominance paid off on 70 minutes when a Fred Kirby through ball found Harri Douglas on the left wing who cut inside the box and unleashed a shot that crashed in off the post for the equaliser. Maidenhead took the lead again soon after when the referee overturned an offside decision to award a goal.

Elsewhere in the division, GORING UNITED remain in second place after thrashing visitors TWYFORD AND RUSCOMBE 8-1.

A free-kick from Matt Hayden gave Goring an early lead but within two minutes the same player sliced a corner into his own goal to level the scores.

The second half was one way traffic, Ardill scored his second when he latched onto a defensive mistake and calmly beat the keeper from close range.

Oli Rayner notched his first goal for the team when he slammed home a loose ball after a corner and within a minute Matt Ploszynski added a sixth from another corner.

Monk set up Ardill for an easy finish to complete his hat-trick before Harry Voice’s strength and pace allowed him to round things off by out-muscling a defender and slotting past the beleaguered keeper.

HAMBLEDEN maintained their 100 per cent record in Division 3 as they won their 15th successive match by beating visitors GORING UNITED RESERVES 5-0.

After an even start Hambleden created the first chance of the game when Jonny Openshaw saw his shot over the defence narrowly go over the bar.

Five minutes later the ball fell to Liam Painter who shot from the right outside of the area which Matt Trimmings in the Goring goal saved but Openshaw was quick to the ball and scored from the rebound.

Towards the end of the first half Goring had the better of the play but couldn’t make their way through Manuel Pinto in the Hambleden goal.

Just before half time Richard Ballis went on a run but his shot clipped the goal post.

In the second half Hambleden played some good football. Mathew Byrne won a good header in his own half which found Painter whose shot was blocked before Nick Holzer scored.

Hambleden made it 3-0 when the ball was passed across to Lewis Drake who found Openshaw to score.

Openshaw then completed his hat-trick from the penalty spot and soon after, from another spot kick, Painter made it 5-0.

In Division 4, HENLEY TOWN DEVELOPMENT went down to a 4-2 defeat at BRAYBROOKE in a match that saw Jack Earl and Jack Green both sent off for the visitors. Sam Earl netted both the goals for Henley.