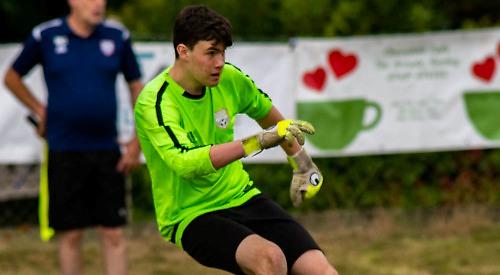 Stuart Moss and Craig Haylett were also on target for the villagers as they ran out 4-2 winners.

HENLEY TOWN were held to a 1-1 draw at home to SB PHOENIX in their Division 1 clash at the Triangle Ground.

Henley started brightly, keeping possession and put the Phoenix defence under pressure with some early chances.

The hosts thought they had taken the lead when the visiting goalkeeper could only parry a Will Churhward shot that fell to Dan York who headed into the net only for the linesman’s flag to be raised.

The early pressure eventually paid off when an Alex Walmsley ball over the top found Dan York on the right wing whose well placed cross was met by Charlie Douglas who cushioned a well timed header into the back of the net just outside the six yard box.

Henley came close to doubling their lead when a Brendan Keane header was cleared off the line by a Phoenix defender just before half-time.

In the second half Phoenix started brightly with some good spells of possession keeping the Henley defence on their toes.

The visitors equalised when a ball over the top was latched onto by their right winger who finished well into the bottom right corner.

Henley pushed for a winner and came close when a Tom Essam through ball was latched onto by Charlie Douglas who was denied by a smart save from the Phoenix goalkeeper.

Elsewhere in the division GORING UNITED crashed to a 4-1 home defeat against SLOUGH HEATING LAURENCIANS.

Goring, missing several key players, fell behind within a minute. Poor defending allowed Slough a close range shot which was well saved by Tom Canning but the rebound was fired home.

Seven minutes later the Goring defence failed to deal with routine balls on two occasions within a minute they conceded goals to trail 3-1.

Shortly before half-time a Goring attack was broken up allowing Slough to counter quickly and make it 4-1.

Goring improved in the second half but neither side was able to add to the score.

In Division 2 HAMBLEDEN ran out 4-1 winners at home to MAIDNEHEAD TOWN A.

The hosts, missing five regular players, settled into a pattern of play that caused the visitors problems early on.

Hambleden took the lead after 15 minutes when goalkeeper Manuel Pinto played the ball out to Henry Arthur in defence who played a good ball over the visiting defence to find Rowan Stacey who fired home.

The home side increased their lead when midfielder Richard Vallis beat a player before threading the ball through to Nick Ellis, who scored at the far post.

Five minutes before halftime Liam Painter found Alex Harris White at the far post who scored to make it 3-0.

Manuel Pinto pulled off a good save before Maidenhead eventually pulled a goal back when a mistake on the right hand side by Freddie Lock led to the visitors netting to narrow the deficit.

Lock soon made up for his mistake with a fine bit of play on the right hand side before scoring at the near post to make it 4-1.

In Division 3 GORING UNITED RESEVES ran out 2-0 winners at SB PHOENIX A. Geroge Scoffham and Chris Allan were the scorers.

Elsewhere in the division HAMBLEDEN RESERVES went down to a 2-1 defeat at READING YMCA RAPIDS. Paul Gibbs was the scorer for the visitors.