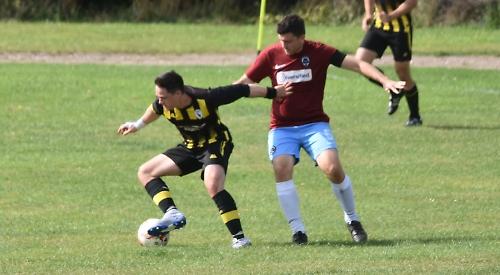 WARGRAVE suffered their second Premier Division defeat of the season as they went down 3-1 at MAIDENHEAD TOWN. George Hepburn was the scorer for the visitors.

In Division 1 ROTHERFIELD UNITED went down to a 2-1 defeat against league leaders HURST at Bishopswood with Ryan Szram scoring the only goal for the hosts. Elsewhere in the division GORING UNITED lost out 4-1 at SLOUGH HEATING LAURENCIANS with Harry Voice netting for the visitors.

HAMBLEDEN moved up to third in Division 2 thanks to a 7-3 home win against BERKS COUNTY SWORDS.

Going into the match the villagers were missing several players and gave Jordan Ridgley, Miguel Ballon and Zodey Sabijan their first starts of the season.

The home side were on top early on and took the lead when Lewis Drake won the ball in midfield and played a through ball to Jonny Openshaw who did a stepover in the box before firing home.

Soon after the visitors broke away down the right hand side and forced a corner from which an unmarked player equalised.

Hambleden restored their lead when a long throw found Openshaw who nipped in and headed home.

The hosts increased their lead when Liam Painter won the ball and fired home a 30-yard shot into the top corner. Five minutes later the visitors pulled a goal back from another corner routine.

On the stroke of half time Hambleden won a free-kick on the edge of the box when Nick Ellis was brought down. Painter stepped up and fired home his second of the game to make it
4-2.

In the second half the visitors pulled another goal back, this time directly from a corner.

Hambleden brought on Nathan Horder before Openshaw managed to restore a the home side’s two goal advantage as he completed his hat-trick to make it
5-3.

Midway through the second half Drake became the provider as his ball over the top sent Horder free to score two goals as he outpaced the defence to make it 7-3.

With 25 minutes of the match remaining 18-year-old Sabijan made his debut and produced some good touches in midfield.

In Division 3 GORING UNITED RESERVES eased to a comfortable 5-0 home win against TAPLOW UNITED RESERVES. Alex Fletcher, Chris Allan, Gary Heath, James Mugford and Jon Nicholas were all on target for the hosts.

In Division 4 HENLEY TOWN DEVELOPMENT continued their fine start to the season as they beat visitors FARNHAM ROYAL MAVERICKS 1-0 at the Triangle Ground.

Henley started well and opened the scoring from a free-kick by Freddie Kirby after 20 minutes.

Keeper Matt Baulchin had little to do, but made a good save from a rare Farnham attack soon after.

Town missed half a dozen good chances but couldn’t increase their lead before half time.

The second half continued with Town on top and on two occasions the home side had two efforts ruled out with the referee deeming the ball hadn’t crossed the line.

Farnham came close towards the end when they hit the post but Town held on for the win.