Openshaw nets treble as side move to top of table 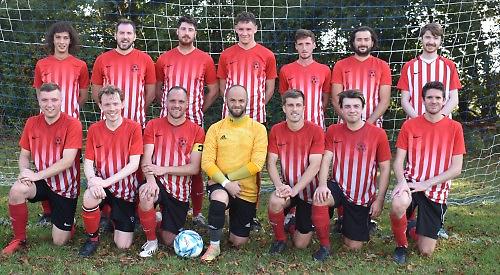 A HAT-TRICK by Stuart Moss helped WARGRAVE move up to fifth place in the Premier Division last Saturday thanks to a 6-2 home win against READING CITY U23s.

City took the lead early on before Wargrave responded with goals from Sam Wild and Moss to make it 2-1. A sin bin for Wargrave put the home side on the back foot and Reading equalised just before half time.

The opening 20 minutes of the second half were even before Wargrave took the lead again through a Moss penalty.

Wargrave controlled the rest of the game and continued to make chances with further goals coming from Craig Haylett, a debut goal for Sam Guze from the penalty spot and skipper Moss completing his hat-trick.

HENLEY TOWN maintained their unbeaten start to their Division 1 season as they drew 2-2 at SLOUGH HEATING LAURENCIANS in their first away match of the season.

Henley started the game slowly and it was Slough who came closest to opening the scoring when the ball fell to a Slough attacker who was denied by a good save by Isaac Aitchison. Henley were on the back foot for the opening 10 minutes as Aitchison made another save to keep the score goalless.

The visitors started to grow into the game and grabbed the opening goal when a Tom Essam through ball was latched on to by Harri Douglas who chipped it over the Slough goalkeeper to make it 1-0.

Henley grew in confidence and had a couple of half chances to grab another goal. However, the visitors were unexpectedly pegged back when Slough broke away from a Henley corner and pinched a goal just before half-time.

Henley started the second half with intensity and were rewarded with a penalty when a clever through ball by Mike Classen was latched on to by Harry Geyton who was taken out by the Slough goalkeeper. Geyton stepped up and fired home into the bottom left corner to make it 2-1.

Henley continued to dominate but were unable to add to their score and were once again punished late on as Slough grabbed an equaliser with 10 minutes remaining. The game was end to end in the final 10 minutes but neither team were able to find the winning goal.

Jonny Openshaw scored a hat-trick to help HAMBLEDEN move to the top of Division 2 thanks to a 7-2 home win against DATCHET.

The hosts took the lead when a Rowan Stacey 40-yard through ball found Louis Drake who fired home. Hambleden were 2-0 up at half-time after a Liam Painter cross found Openshaw who netted his first goal of the afternoon.

Early in the second half a Josh Lewis header found its way to Painter who made it 3-0.

Soon after substitute Gabriel Pinto played a through ball to Openshaw who scored his second of the afternoon to put the hosts 4-0 up.

Datchet pulled a goal back through a long-range shot before Hambleden increased the pressure that saw them hit the post twice while Openshaw and Drake both had one-on-one chances with the visiting keeper blocked.

Hambleden eventually made it 5-1 when a Richard Vallis through ball found Painter who netted his second of the game.

Gabriel Pinto then out paced the visiting defence before scoring to make it 6-2. Datchet pulled a goal back before Fernando Muzio won the ball in midfield for Hambleden before setting up Openshaw who completed his hat-trick.

With time running out Hambleden goalkeeper Manuel Pinto pulled off a good save to deny the visitors.

In Division 3 HAMBLEDEN RESERVES are still looking for their first points of the season after going down to a 5-1 defeat at SB PHOENIX A. Daniel Mckenzie was on target for the visitors.

In Division 4 HENLEY TOWN DEVELOPMENT moved to joint top in the table thanks to a 3-1 win at SB PHOENIX DEVELOPMENT.

Henley started slowly and conceded from a corner after 10 minutes. The home side could have increased their lead soon after but Matt Baulchin made a good save from a breakaway attack.

The visitors slowly worked themselves back into the game and equalised through a Guy Brown goal after half an hour.

Down to 10 men with George Chaplin sin-binned for dissent, Freddie Kirby then scored his ninth goal of the season just before half time to make it 2-1 to the visitors.

Phoenix rarely threatened in the second half and Town should have added to their tally before Chaplin made amends with a 25-yard strike into the top corner to wrap up the points.