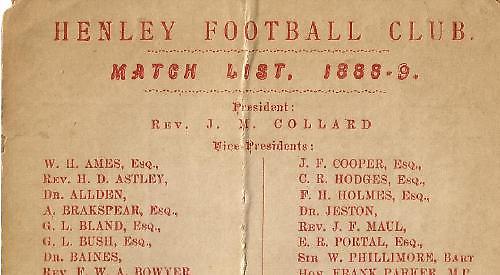 IN 1871, trades unions were legalised in England, the first bank holidays came into being, the Great Chicago Fire occurred and Stanley found Livingstone.

It may not have seemed an especially memorable year in Henley but with the arrival of the railway
14 years earlier, the town had seen the beginnings of a revival.

Even earlier, it had been growing in a southerly direction, although that part of it was then in the parish of Rotherfield Greys. Compared with other towns in Oxfordshire, it stood higher in terms of population than it does now.

Then, as now, the one thing that made Henley famous in the eyes of the world was the royal regatta.

Besides rowing, cricket was widely played in the town and the immediate neighbourhood as it had been for many years. Winter sports were much more low-key.

But times were changing. Football had been an important part of the national culture for time beyond memory but the greater spread of the game had been hindered by the lack of a uniform set of laws.

Each club and school had its own rules and had to enter into negotiations before outside opponents could be met. The term “football” did not just mean association football, but also covered rugby and other varieties of the game played by small numbers of devotees.

As transport became easier and with a half-holiday each week more common, it became easier for clubs to meet one another. Hence the need for a set of laws that everyone could accept became more urgent.

It was in a quest to draw up such a set of laws that the Football Association was formed in 1862. It soon became obvious that they could not keep the rugby players on board and until 1868 the FA made so little progress that there was a chance it would not survive at all.

But then its numbers began to increase rapidly. By 1870 “soccer” clubs were quite plentiful in London but they were still in a minority compared with those dissidents who played rugby — the form of football developed at Rugby School — even before the Rugby Football Union was founded in 1871.

When the association game was enthusiastically adopted in the Thames Valley, it was one of the first areas in the country where soccer was the form of football played by the majority.

The Windsor Home Park club was founded in September 1870, quickly followed by Maidenhead and Marlow. High Wycombe came into being at the start of the following season followed by Henley and Reading. The Swifts, based in Slough but with players brought in, were also playing association rules by the spring of 1871 and thereafter new clubs followed thick and fast.

By the time Henley’s first season of 1871-72 arrived, the laws (and thus the way the game was played) had already changed substantially by comparison with the FA’s original code.

But these still left many points uncovered, while those that were dealt with were not even universally adhered to by all the FA members.

The first league competition was still another 17 years away but this was the first season of the FA Cup, with Maidenhead and Marlow both among the 15 entrants.

The rules for the competition laid down for the first time such vital matters as how many players should make up a team. Even then, these conditions were compulsory only in the cup and otherwise optional.

One matter that was particularly open to variation was the size of pitches: Maidenhead’s was 200 yards long. Instead of a crossbar, there was normally a tape linking the two posts while goal nets had not yet been invented.

The game was controlled by two umpires, one appointed by each side. Although the offside rule had been changed as long ago as 1867 to allow the ball to be passed forwards, it took players some time to realise this meant that passing could be more effective than dribbling.

The best of the early players were extremely skilful dribblers and tended to hunt in packs so that, if one man lost the ball, a colleague was well placed to continue the attack.

Because of this, team formations were very much forward-oriented. Seven of the 11 players fielded by most teams were forwards.

The game continued to evolve quickly so that football looked more like what we know today than it did even 10 years earlier, when Henley was founded and heading, for instance, was rarely seen.

The first we hear of a football club in Henley is in the Henley Advertiser of November 4, 1871.

While at Wycombe, Marlow and Reading a public meeting was called to bring a football club into being, it appears unlikely that this was the case in Henley.

The move to form a club was the initiative of two of the younger members of local brewing families, Archibald Brakspear and Henry Ive, who doubtless knew one another well. They appear to have relied on mentioning the matter to their friends rather than obtaining publicity in the local papers.

The club’s “opening game” was played on the afternoon of November 23, 1871 on the “Rifle Ground”, now Dry Leas and the home of Henley Rugby Club.

The dressing rooms were at the Catherine Wheel Hotel, though these were provided mainly for the convenience of visiting sides.

Only 15 players turned up for that first hour-long practice game, with Brakspear’s eight pitted against Ive’s seven and winning 1-0, their captain scoring the goal. Play was “not very scientific” but this was only to be expected as the majority of players were novices.

The match was almost certainly played under the FA rules, but Brakspear was an old boy of Marlborough College, enthusiastic advocates of the rugby game.

It was thus foreseeable that he would try to steer the club in a different direction and, two days after that opening game, the Advertiser stated: “It is proposed that on Saturdays, the rugby game (slightly modified) shall be practised. It is understood that many in the neighbourhood would join the club if the more exciting game were adopted, the association rules not being to their taste.”

In fact, it was more likely that the prevailing dense fog had limited the attendance.

In any event, the rugby rules had certainly been dispensed with by the time more formal matches were arranged in the following February. The decision to back the FA code was probably influenced by two factors.

First, when other clubs were so few, the fact that there was already some soccer being played in the Thames Valley meant there was more likelihood of being able to obtain local opponents if the same code was followed.

Second was the arrival in Henley in the summer of 1871 of William Wing, shortly to become the town surveyor. He went on to become the most important figure in the establishment of association football in Oxfordshire.

He was 26 when he arrived and such a passionate campaigner for soccer that he must have already played it elsewhere.

It seems to have been his fervour that kept Henley alive in those early days when it was often in danger of dying out. Eventually, Wing became the prime mover in the foundation of the Oxfordshire Football Association.

This was an encouraging sign and by the beginning of February 1872, the members thought they had learned enough to arrange two formal matches within the club, partly to prepare themselves for their first match against outside opposition.

The two XIs were under the captaincy of Ive and Wing respectively.

The first match was played on Friday, February 2 when “after an hour of exciting play, the game was drawn, neither party having been able to obtain a goal”.

The teams on this historic occasion were listed in alphabetical order, apart from the captain’s name being given first, and were as follows:

The return match was played five days later when, “in consequence of several changes, Mr Ive’s team was decidedly the heavier and after some spirited play obtained a well-deserved victory by two goals (kicked by Messrs H Giles and
E Cook)”.

The match ended in another scoreless draw. Giles went close on two occasions for Henley while Webster’s “scientific dribbling” was remarked upon in the Advertiser.

The South Bucks Free Press report obviously emanated from the home club, commenting: “Taking into consideration that this was the maiden match of the Henley club, some allowance can be made for the wildness of their mode of playing.

“If Wycombe may be allowed to do so, they would suggest that the association rules should be adhered to in a little stricter sense, handling, charging from behind and hacking being incessant during the match.”

High Wycombe’s own first match had been played only two months earlier but there was much foundation date snobbery between the early clubs.

Henley were soon saying much the same thing about Reading when they changed (after two matches) from rugby to soccer.

Considering the small number of clubs in the neighbourhood and how late they started their season, the new Henley Football Club did well to manage six inter-club fixtures in all in 1871-72.

In the second match, a return game with Wycombe which ended in a 1-0 defeat, the Advertiser reported: “The visitors were assisted by one player whom the Henley men did not bargain for in the shape of Dame Fortune for, although the ball hovered near the Wycombe goal for the best part of the game, the fickle goddess not only withheld her assistance from the home team but at an unhappy moment assisted their opponents in snatching a victory by what we are sure they would be the first to admit was a very ‘fluky’ goal.”

In their next game, Henley lost 0-3 to Maidenhead at Dry Leas despite one of the visiting players suffering a broken collarbone. In their fourth fixture, Henley played better and beat Marlow 1-0 at home. Frederick Ball, a plumber who lived in Duke Street, scored Henley’s first ever goal and indeed their only goal in that first season.

The return matches at Maidenhead and Marlow brought the season to its close. At the former, the home side “proved themselves so very much stronger” than Henley, winning 4-0.

At Marlow, however, in another goalless draw, Henley “had decidedly the best of it throughout” and “the form displayed by both sides elicited frequent applause from the company present”.

This may not have been a strikingly successful start but as good a one as could be expected when it is remembered that their opponents were dictated by geography rather than their playing standards.

More importantly, a light had been lit.