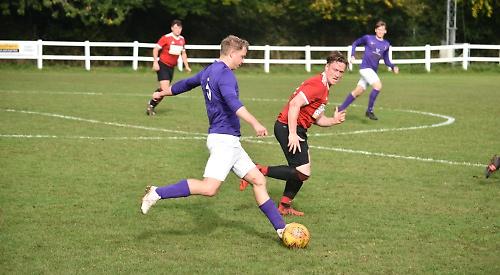 ROTHERFIELD UNITED went down to a 5-4 Division 1 defeat away at ELDON CELTIC last Saturday.

Karl Clark netted twice from the penalty spot for United while Aaron Attfield and Thomas Golden were also on target for the visitors.

High-flying HAMBLEDEN came from a goal down to secure all three points in a 3-1 win at AFC WINKFIELD.

The visitors, playing up the slope in the first half, went a goal behind after a mix-up in the defence allowed a home player to shoot from close range. The shot was parried away by Hambleden goalkeeper Manuel Pinto but the ball found its way into the net.

Soon after Liam Painter was brought down 30 yards out from the home goal. Painter stepped up and drove the free kick into the top corner to level the scores. Soon after Painter found himself through on goal but his shot rattled the post before going out of play.

In the second half, kicking down the slope, Hambleden soon took the lead when a Rowan Stacey free kick was headed home by Richard Vallis.

Soon after Jonny Openshaw held the ball up and played it back to Painter who fired home from 35 yards out for his second and his side’s third of the game.

Just before full time Hambleden had the ball in the back of the net again when a Painter free-kick was headed against the crossbar by Openshaw. The ball fell to Louis Drake who fired home but his effort was ruled out for offside.

In Division 3 HAMBLEDEN RESERVES are still searching for their first points of the season after they went down to a 5-1 defeat at home against READING CITY DEVELOPMENT. Nicholas Ellis was on target for the hosts.

Elsewhere in the division, GORING UNITED RESERVES went down to a 6-0 home defeat at BURGHFIELD RESERVES.

In Division 4, HENLEY TOWN DEVELOPMENT drew 1-1 in a top-of-the-table clash with HARCHESTER HAWKS at the Triangle Ground.

Town dominated the first half and came close to opening the scoring twice with good efforts from George Chaplin and Will Jaycock.

Henley continued to be on top for the second half but Harchester scored from their only chance of the game when goalkeeper Matt Baulchin misjudged a high cross into the far post, leaving an easy header for the visitors to take the lead.

Luke Mulvaney twice, Freddie Kirby and Macaulay Smith all had easy opportunities to score until a Hugh Barklem header rescued a point with a couple of minutes to go.