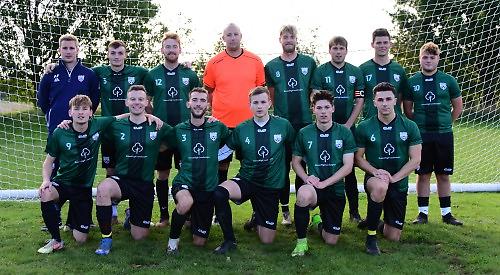 Emmer Green took a while to get going but on the half hour mark James Bozarth’s hard work paid off and he put the home side in front.

Daniel Donegan made it 2-0 from the penalty spot after Charlie Cooper was brought down in the box. Kites worked hard but couldn’t break Emmer Green’s solid defence and soon were another goal behind after Charlie Cooper’s good run put Luke Potter in on goal who finished clinically to make it 3-0 at the break.

Cooper made it 4-0 with a solo run and finish and Potter made it 5-0 shortly after. Jack Drinkwater was on the end of a good ball from Joe Harvey to make it 6-0 and debutant Dylan Wicks scored his first goal for the club winning Daniel Donegan’s corner and heading into the roof of the net. James Bozarth made it 8-0 scoring from the spot after he was fouled in the box and Potter made it 9-0 after the keeper saved the initial shot only for it to rebound straight to Potter’s feet.

Kites’ morning got worse as Jack Drinkwater chipped the ball to the back post for Daniel Donegan to get a touch and head the ball home and Cooper made it 11-0 with a fine effort from the edge of the box.

Daniel Donegan made it 12-0 and Ben Cousins could have got his name on the score sheet after a fine run down the middle of the park but selflessly passed to Bozarth instead to get his hat-trick. Potter finished the scoring with his fourth and Emmer Green’s 14th of the game.

In Division 2, league leaders GORING UNITED ran out 5-0 winners at home against BURGHFIELD A in a match that saw Daniel Wallace score four goals in the space of 25 minutes.

All the goals came in the first half with Andrew Taylor opening the scoring after 10 minutes. Wallace then put his side 2-0 up five minutes later before going on to score a further three goals.