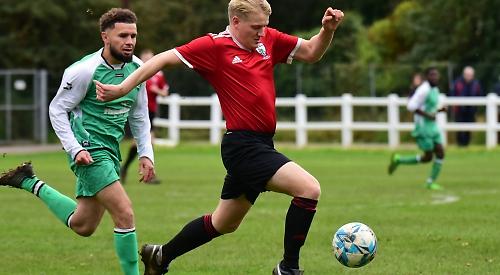 WARGRAVE came from a goal down to earn a point in their home Premier Division clash with MORTIMER last Saturday.

The second half was relatively uneventful with both defences on top.

HENLEY TOWN maintained their unbeaten start to the season as they beat ELDON CELTIC 3-1 at the Triangle Ground in their Division 1 clash.

Town made a fast start to the game when Will Chruchwood was played through one-on-one but his effort was saved well by the Eldon goalkeeper to deny the hosts.

Henley took the lead after 20 minutes when a Dan Sykes strike from 25 yards out found the top left corner.

Eldon came close to equalising when their winger put in a dangerous cross which was met by their striker but a fine reaction save from Ben Claridge kept Henley in front.

Henley began to dominate the half and had multiple chances to score fut failed to take them as they ended the half 1-0 to the good.

Early in the second half Henley made it 2-0 when a Dan Sykes through ball was latched on to by Charlie Douglas who showed good composure by going round the goalkeeper and tapping home his sixth goal of the season.

Eldon almost pulled a goal back but two fine saves from Claridge kept the visitors at bay.

Henley made sure of victory when Alberto Gingell played through Harri Douglas who raced through on goal before squaring the ball back across to Gingell to tap home his first of the season. The visitors pulled a goal back when a deflection trickled into the Henley net.

Elsewhere in the division GORING UNITED went down to a 3-1 defeat away at TADLEY CALLEVA RESERVES. Harry Voice netted for the visitors in the first half.

In Division 3, HAMBLEDEN RESERVES remain bottom of the table and without a point as they went down to a 3-1 home defeat against PANGBOURNE. Andrew Roberts was on target for the home side who have now lost all six of their game this season.

Elsewhere in the division GORING UNITED RESERVES went down to a 3-1 home defeat against READING YMCA RAPIDS. Jamie Taylor was on target for the home side.