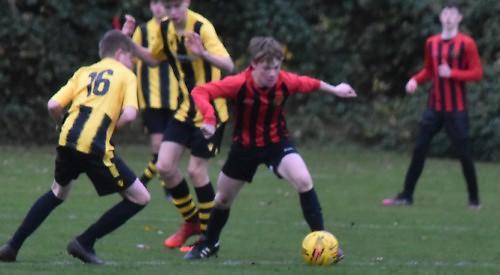 The hosts got off to the worst possible start after a defensive blunder let the opposition into the penalty box to take an early lead.

Henley struggled to find their rhythm and gain a foothold in the game. Goalkeeper Joe Hybert had to be at his best to keep out a stinging effort as Rotherfield looked for a second.

Tom Yeoman, playing in the centre of midfield, was instrumental in getting the Hurricanes back in the game as his tough tackling and incisive runs forward helped them get back on the front foot. Yeoman was aided in the centre of the park by Jack Johnson whose clever use of the ball started to prove crucial.

Alfie Algar, playing in the holding midfield role, slipped past a Rotherfield player and played the ball to Tom Atkinson who flicked it on into space for Josh Livesey to run on to. Livesey used his pace to get to the ball before the Rotherfield keeper and finished with aplomb.

Finnbar Scott was having a fine game at left back and he delivered a stream of crosses from that side of the pitch that caused trouble for the visitors. Mickael Vaisset was having an equally good game on the right side of defence and was proving effective in the air as his heading prowess meant that Rotherfield were winning nothing via the aerial route as the teams were level at 1-1 at half-time.

The hosts started the second half strongly as Max Stokes went on a 40 yard run down the left before cutting inside and firing a shot that went inches wide of the far post. Joe Turner dominated the midfield, breaking up any opposition attacks whilst getting the Hurricanes moving forward with his shrewd passing. Agar then rattled the crossbar with a fierce shot that bounced down on to the line but not over it as the hosts looked for a second goal.

It was Atkinson that proved provider again as his perfectly weighted ball found Christian Rowbotham in space. Rowbotham cut in from the right and burst into the opposition box before unleashing a shot that beat the Rotherfield keeper as it nestled into the far corner of the net. As the game wore on the home side began to drop deeper and deeper as they looked to hang on to their first league win of the season. The centre back pairing of Luca Thomson and Oliver Saunders shone as they refused to let the opposition through. Set piece after set piece came raining in on the hosts’ goal but the two defenders kept them at bay as Henley collected all three points.