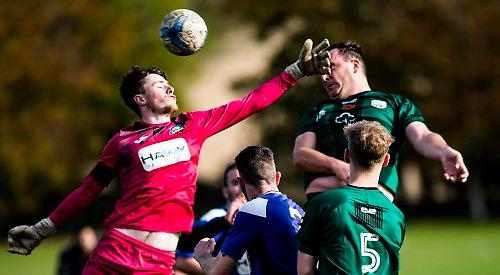 DANIEL WALLACE netted six goals as GORING UNITED eased into the next round of the Sam Waters Oxfordshire Cup last Sunday.

United were far too strong for hosts WHITENIGHTS as the visitors romped to a 13-1 win.

EMMER GREEN progressed into the next round of the Industrial Cup thanks to a 3-0 win away at CALCOT ROYALS.

The first half was very even with both sides hitting the woodwork but no one made the crucial breakthrough as the teams changed ends goalless at half-time.

In the second half good work on the left hand side from Jordan Lovelock saw his cross was stabbed home by James Bozarth to put the visitors ahead.

Emmer Green doubled their lead when Jack Drinkwater’s cross was met by Charlie Cooper. The goalkeeper saved his initial shot but the ball spun and looped into the far corner to make it 2-0.

The visitors scored their final goal of the game seconds after when Bozarth completed his brace with a lobbed finish just before full time.