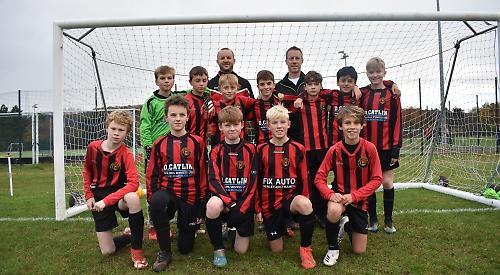 AFC HENLEY HURRICANES U12s lost out narrowly to a single goal to WOKINGHAM AND EMMBROOK SPURS U12s at Jubilee Park in a fiercely competitive game in the East Berks Alliance League 1.

Henley played with good passing and movement but were unable to break
down the Wokingham defence.

Henley settled the quicker, retaining possession and pressing Wokingham back and forced two early corners. As the game progressed Wokingham came more into the game and had the first meaningful effort over the bar from distance. This was followed up with a shot low to the corner which goalkeeper George Beasley saved well.

Henley pushed forward and created chances with Corben Galloway going close with a free kick and Max Watson being denied by the keeper after being put through. The second half started in a similar fashion to the first, with Henley pushing forward and Freddie Estornel forcing a good save from the Wokingham keeper. A long goal kick from Beasley was trapped by Galloway on the run who then passed several defenders before narrowly shooting wide. At the back, the Henley defence of Rupert Arsyad, Isey Walmsley, Charlie Myers and man-of-the-match Harry Biggs
were repelling everything that Wokingham threw at them.

At the other end, Henley continued to create chances with Arthur Massey being denied on a number of occasions after being put through.

Halfway through the second half came the decisive moment of the game with a break by Wokingham through the middle ending with a shot from six yards out into the net.

Undeterred, Henley continued to press for an equaliser with Rhys Herbert and Ethan Bentley battling superbly in midfield, the latter going close with a shot from distance, and a free kick from Lorenzo Nicoletti-Dowd going the wrong side of the crossbar.