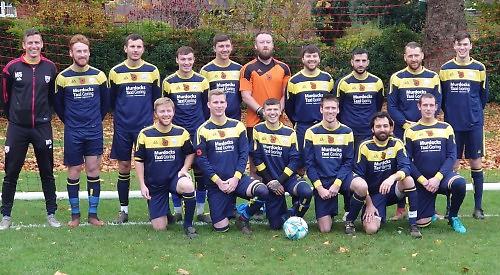 ROTHERFIELD UNITED went down to a 5-1 defeat away at MAIDENHEAD TOWN RESERVES in their Division 1 clash.

United took the lead on 20 minutes when Jamie Clark found the back of the net.

In the second half the hosts hit back by scoring five goals without reply.

Rotherfield’s cause was not helped after having Jake Bateman sent off after 80 minutes. HAMBLEDEN leapfrogged WINDLESHAM AND CHOBHAM DEVELOPMENT to take top spot in Division 2 after winning 5-0 at the Dene.

The home side started strongly and took the lead when a Liam Painter diagonal cross found Nathan Horder who fired home.

A quick succession of corners and throw-ins eventually took their tole on the visitors as the home side doubled their lead. A Painter throw in found Louis Drake who flicked the ball on to Freddie Lock at the near post who headed home.

Early in the second half Hambleden made it 3-0 when Alex Harris-White scored following a goalmouth scramble.

Hambleden goalkeeper Manuel Pinto pulled off several good saves to maintain another clean sheet for the home side. The home side went 4-0 up when Josh Lewis won the ball back in midfield and his pass found Rowan Stacey who rifled the ball home into the roof of the net.

Hambleden had a goal disallowed soon after as the referee deemed the ball had not crossed the line.

The villagers completed the five goal rout when a Painter ball found Nicholas Ellis in the penalty area and he was brought down for a penalty. Craig Trimmings stepped up to score from the spot. HAMBLEDEN RESERVES came from 2-0 down to win 4-2 in their Division 3 clash at GORING UNITED RESERVES.

The hosts raced into a 2-0 lead thanks to goals from Chris Allan and Jonathan Nicholas. Gabriel Pinto pulled a goal back for the visitors on the stroke of half-time.

In the second half Pinto scored his second of the game to equalise the scores before Alfie Wallis put the visitors 3-2 up. Pinto completed his hat-trick to wrap up the scoring on 84 minutes.