Hill is spot on as Henley put Saints to the sword 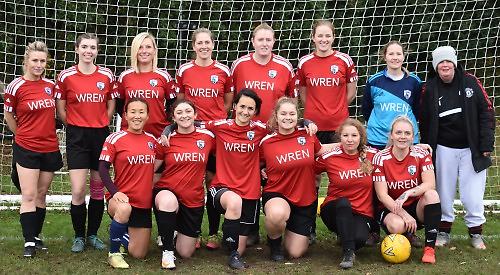 A good passing move saw a through ball from Georgia Hill find Hannah Palmer who scored in the 18-yard box to give Henley the lead after just 10 minutes.

Henley continued to dominate play keeping the ball in the Wycombe half. Any breaks from Wycombe were quickly dealt with by the back four. Skipper Louise Colam ensured her defensive line of Friend, Houghton and sweeper Candillio kept pushing up to ensure keeper Carpenter had little to do.

Good midfield play from Price, Rogers, Carter and Tominey saw them find gaps, while a quick run along the right from Palmer found Hill in the centre who sent the ball over the keeper to make it 2-0.

Wycombe came out quicker in the second half catching the Henley defence off-guard and drawing them too far left where a quick switch of play saw them score from a half volley from just outside the box to make it 2-1.

Henley rallied and looked more composed on the ball and connecting passes through the centre. Pace came from Carter racing through to the box where a push from the Wycombe defender saw Henley awarded a penalty which Hill fired home.

Henley continued to mount pressure on the visiting side with more shots from Rump hitting the crossbar, skipper Colam now in a midfield position, Palmer and Hill.

On 65 minutes a surge forward from Houghton found a through ball to Rump who fired home past the Wycombe goalkeeper.

Elsewhere in the division, GORING UNITED RESERVES went down to a 6-0 home defeat against KIDLINGTON YOUTH GIRLS U18s.