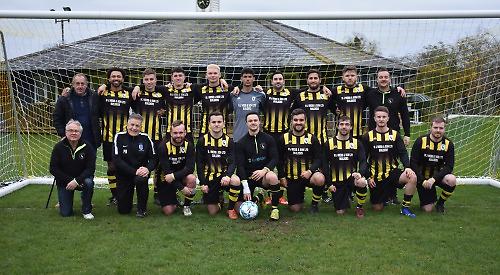 HENLEY TOWN came from 2-0 down to grab a point from their Division 1 clash with league leaders HURST at the Triangle Ground last Saturday.

The first chance fell to Hurst when a loose ball in the box was met by their striker whose goalbound effort was cleared off the line by Dan Sykes.

Henley’s best chance of the half came shortly after when good work from Alberto Gingell down the left delivered a cross to Harry Geyton but his header went wide.

Hurst took the lead when a long ball over the top was taken down by their striker who coolly finished. The visitors doubled their lead on the stroke of half-time when an unfortunate ricochet from a clearance found its way into the goal.

Henley pulled a goal back when a Harri Douglas low cross was smashed in by Geyton.

Time was running out for Henley but they never gave up and were rewarded with an equaliser in added time when Hurst couldn’t clear their lines and Geyton was on hand with a composed finish. Henley did have a chance to win it when Alex Walmsley cross was met by Brendan Keane but his header crashed against the post. ROTHERFIELD UNITED ran out comfortable 3-0 winners in their home clash with WESTWOOD WANDERERS RESERVES.

Meanwhile GORING UNITED, with nearly a full squad available for selection for the first time this season, eased to a 7-2 home win against MAIDENHEAD TOWN RESERVES.

After four minutes Harry Voice beat the offside trap to slot home his first of the afternoon for the hosts. The was an even affair until after 30 minutes when a Maidenhead defender was shown a red card for hauling back Dan Wallace when he was through on goal. Matt Hayden dispatched a perfectly struck free kick into the top corner.

A third followed before half time when a Maidenhead player turned an effort from Wallace into his own goal. Shortly after half-time Ed Ardill added a fourth, converting a crossfield pass from Hayden. Maidenhead attempted a brave comeback when Tom Brownlow’s outstretched leg deflected the ball past a wrongfooted Matt Trimmings in the Goring goal.

The margin was soon restored when Voice’s surging run ended with a crashing finish. Determined not to miss out on the act Wallace added a sixth goal following fine work from Michael Holloway before Maidenhead converted a second goal following some sloppy Goring defending. Wallace completed the scoring with a volley that gave the keeper no chance to seal a convincing victory.

HAMBLEDEN remain top of Division 2 despite drawing 2-2 at home against TWYFORD AND RUSCOMBE in a hard fought and at times ill-tempered clash that saw the visitors have three players sin-binned throughout the game. Hambleden took the lead when the ball was cleared from their defence to Louis Drake who set up Nathan Horder who chipped the goalkeeper.

The visitors hit back and a long throw was cleared off the line by Henry Arthur. Soon after Twyford equalised when a player cut in from the left unchallenged to score.

Hambleden went close to taking the lead just before half-time when Liam Painter when close with a one-on-one with the goalkeeper before Drake was put through on goal but his shot went wide.

Early in the second half Jonny Openshaw had the ball in the back of the Twyford net but the goal was disallowed for offside.

Soon after Twyford broke away against the run of play to take the lead. Hambleden hit back straight away when a Nick Ellis cross was met by Openshaw to equalise.

In the final minute Hambleden were denied all three points when a Painter free kick clipped the outside of the post.

In Division 3 HAMBLEDEN RESERVES went down to a 7-1 defeat away at ROBERTSWOOD. Alfie Wallis scored the consolation goal for the visitors two minutes before full time.

HENLEY TOWN DEVELOPMENT remain top of Division 4 after picking up a point at FARNHAM ROYAL MAVERICKS with Fred Kirby netting twice in the 2-2 draw.