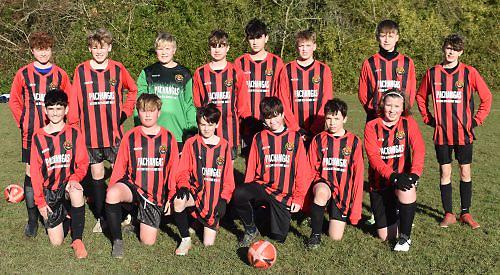 Following a poor start to the season where the Hurricanes lost their first four matches, they had recovered well over the last few weeks with three league wins and a cup win.

However, with a strong swirling wind in their faces, the Hurricanes started slowly and with a combination of not closing down a fast starting Maidenhead team and some slack defending, found themselves 3-0 behind, courtesy of three soft goals within 12 minutes.

The Hurricanes finally got a grip on the game and turned their dominance into pressure but with the wind still blowing hard against them still couldn’t find the back of the net.

The second half started as the first had finished with the Hurricanes pushing forward as a team and the home side looking the most likely to score. After good pressure from the midfield, Morgen Azzari Wynn-Jones was fouled 35 yards out. Charlie Ingram took the free kick, and although a long way out, stung the hands of the Maidenhead goalkeeper who couldn’t hang on to the ball, and Ollie Pratt followed in with quick thinking and quick feet, won the loose ball, rounded the keeper and slotted home.

Eight minutes later, again the Hurricanes midfield broke through and this time, Theo Estornel picked the ball up, drove at the Maidenhead defence and from the edge of the box, unleashed an unstoppable shot into the roof of the net to reduce the arrears to 3-2.

The last 15 minutes of the match was all Hurricanes and despite several efforts they could not find the elusive equaliser in a match that saw defender Henry French named man-of-the-match.