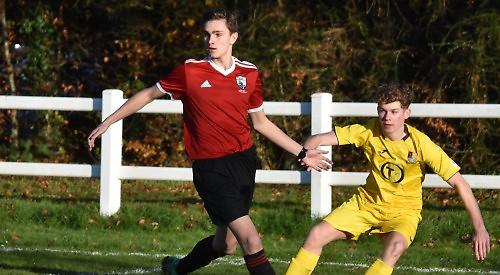 HENLEY TOWN came from a goal down to run out 4-1 winners in their home Division 1 clash with HOLYPORT RESERVES last Saturday.

Henley conceded a goal in the opening minutes when a long ball over the top was latched on to by Holyport winger who finished well.

The home side started to grow into the game and equalised when Charlie Douglas found space inside the box, firing a first-time shot away which beat the goalkeeper bottom right hand corner.

Henley started to dominate the game and took the lead when a Harri Douglas cross was met by Will Churchward whose composed finish just outside the six-yard box.

Town had chances to make it 3-1 but were denied four times by some good saves from the Holyport goalkeeper.

Henley put the game to bed when Churchward was fouled in the box. Charlie Douglas stepped up and finished top right-hand corner for his second goal of the afternoon.

Henley added a fourth when they caught Holyport on the break after a Churchward cross was tapped home from close range by Charlie Douglas to complete his second hat-trick of the season.

GORING UNITED ran out 2-1 winners away at WESTWOOD WANDERERS RESERVES in a close game with few clear chances.

Goring had the majority of the early possession but failed to cause any serious problems to the home defence. After 30 minutes Westwood took the lead when a forward broke clear and slotted home giving Matt Trimmings no chance.

Within a minute Goring equalised when Matt Hayden’s mis-hit corner found Dan Wallace with his back to goal and from an unlikely position he turned and hit a low shot into the corner of the net.

In a bitingly cold wind the second half was a scrappy affair. With four minutes remaining another Hayden corner fell to James Williams who fired home from 10 yards.

Elsewhere in the division, ROTHERFIELD UNITED went down to a 4-0 home defeat against TADLEY CALLEVA RESERVES.

In Division 4 HENLEY TOWN DEVELOPMENT ran out 5-1 winners away a BERKS COUNTY ROVERS on their 3G pitch.