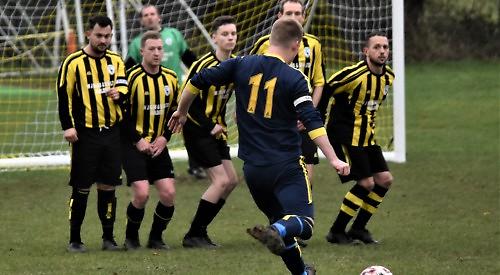 HENLEY TOWN continued their unbeaten start to their Division 1 season with a 2-2 draw at ELDON CELTIC last Saturday.

Eldon took the lead after 15 minutes from a well taken free kick. Henley created plenty of chances and levelled on 35 minutes with a Fred Kirby header from a Harry Douglas corner.

Town continued to dominate the second half and took the lead when Harry Geyton scored with a header after good work down the wing and an excellent cross from Justus Larter.

Sloppy and indecisive defending led to Eldon equalising on the hour.

Henley thought they had scored a winning goal when Zack Dutton tapped in with 10 minutes remaining but the goal was ruled out for offside.

Elsewhere in the division GORING UNITED continued their good form with a 1-1 draw at home to league leaders HURST.

After 30 minutes Hurst took the lead from a corner with a visiting player heading home at the near post. Playing down the slope in the second half Goring dominated the game but found it hard to create any clear-cut chances against a well-organised Hurst defence.

Hurst rarely threatened, relying on breaks, but from one such counter Goring looked in trouble when Matt Trimmings appeared to rush out of his box but he put in a well-timed tackle to win the ball and clear the danger.

Goring continued to probe but after 78 minutes suffered a blow when striker Harry Voice was forced off with a calf injury.

Hurst gave Goring further hope after 80 minutes when they were reduced to 10 men when a player continued to argue the referee after being sent to the sin bin.

Eventually substitute James Mugford earned a point for Goring when his goal-bound shot deflected off a defender for the equaliser.

HAMBLEDEN ended the year with a 4-1 win away at SB PHOENIX RESERVES in Division 2.

Going into the match the visitors, who were short on numbers, were boosted by Jack Naerger making his first appearance of the season having travelled up from Bournemouth. Jonny Openshaw and Nathan Horder both went close for the visitors early on. Hambleden eventually took the lead when a good run by Richard Vallis ended up with the ball falling to Horder who fired home into the top right-hand corner. Soon after Vallis and Craig Trimmings both had to the leave the pitch having picked up injuries.

In the second half the home side put pressure on the visitors goal but they were thwarted by good defending by Alex Harris-White and goalkeeper from Manuel Pinto.

Hambleden doubled their lead when Josh Lewis won the ball in midfield and set up Liam Painter who fired home into the top left-hand corner from 25 yards out. Horder netted his second of the game to make it 3-0 following good build-up play from Lewis and Painter.

The home side then pulled a goal back but Hambleden made sure of all three points when, from a corner routine, Painter netted his second goal at the near post.

In Division 3 HAMBLEDEN RESERVES drew 1-1 at home to GORING UNITED RESERVES. Chris Allan put the visitors ahead after 20 minutes before Luke Logan equalised on the hour mark for the hosts.