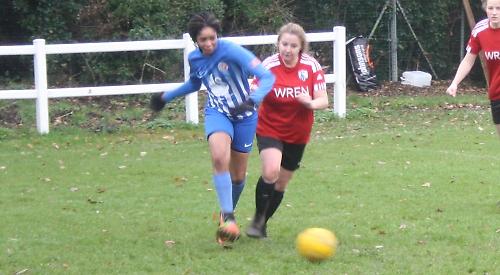 HOSTS Henley Town Ladies lost out to an injury-added goal against league leaders Thatcham and Newbury on Sunday.

Henley fought hard with Eliza Carpenter saving a Thatcham free kick early on. Soon after the visitors were awarded a penalty for a foul in the area but the resulting spot-kick was well saved by Carpenter.

Henley made breaks with winger Alison Hannigan taking a chance from the left which was saved by the Thatcham keeper. Hannah Palmer then had a one-on-one situation with the keeper that was again saved.

Towards the end of the first half Thatcham began to find their stride with a couple of breaks cleared by Rogers and Colam and a long shot headed clear by Houghton.

In the second half an early ball from a Thatcham clearance was well read, controlled and taken through the centre by skipper Colam who played a through ball to Palmer on the right who cut inside past the Thatcham defence before firing home at the near post to give Henley the lead.

Henley created further opportunities before Thatcham began to counter-attack and a one-on-one move saw them equalise.

With the game moving into added on time Thatcham had a cross which was latched on to and scored for the winning goal.