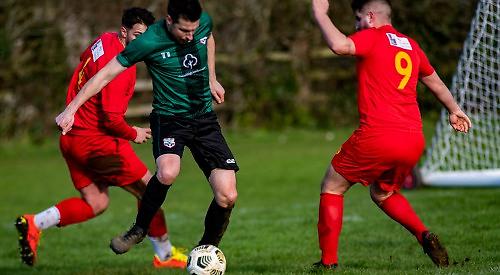 HEAVY rain resulted in a number of matches being called off last Sunday, including EMMER GREEN’S home clash with WESTWOOD
WANDERERS.

In Division 2 GORING UNITED continued their unbeaten start to the season with a 8-0 win at home against ROMANIA UNITED.

Goring found themselves frustrated in the first 20 minutes of the game after a string of fine saves from the Romania goalkeeper.

The breakthrough finally came from a corner on 25 minutes with Dan Houseman striking the ball home. Houseman then doubled the lead after poor marking from a Matt Hayden free-kick allowed him to calmly finish in the bottom corner

In the second half a quick fire double from skipper Andy Taylor and a Tommy Edwards goal made it 5-0.

The game became patchy for 20 minutes before Tom Brownlow and Josh Monk made it 7-0. The impressive Taylor completed his hat-trick in the last minute of the game.