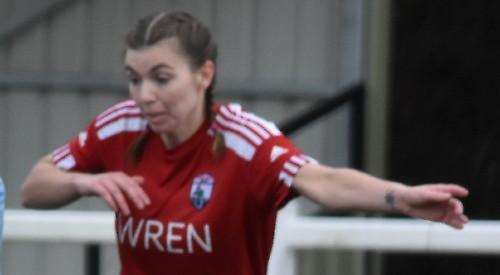 HENLEY TOWN WOMEN won their first Development Division match of the year on Sunday as they triumphed 3-1 at WYCOMBE SAINTS LADIES.

Skipper Lou Colam won the toss to give the visitors an early advantage of playing towards a low sun at a cold and wintry Wycombe Rye.

Henley dominated possession early on and Wycombe attacks were swiftly dealt with by the well organised defensive midfield and solid back line.

After six minutes defender Becca Houghton suffered a blow to the face after winning an aerial battle, and Henley were forced to make an early substitution. Zaya Carter slotted in to join Claire Rilett, Colam and Jen Candilio to shore up the defence whilst Houghton received treatment.

Henley continued to press hard although they struggled to find their usual passing fluency.

After 15 minutes a clever through ball from Chloe Rogers set up a blistering shot from Hill which just skimmed wide of the target to find the feet of Maria Portero who narrowly put the ball wide of the post.

Soon after a Hill free-kick went narrowly wide of the target before Hill saw a cross scrambled off the line.

Henley took the lead on 20 minutes when a Carter through ball found Portero who found the back of the net.

Palmer was fouled in the area on the half-hour mark but the resulting penalty from Hill went over the crossbar. Five minutes minutes later playmaker Gemma Tominey replaced Brown-George to create more chances down the wing.

Wycombe’s best chance of the half came from a free kick which Eliza Carpenter saved with ease.

In the second half Houghton replaced Portero in midfield as Henley continued to apply pressure.

Henley made it 2-0 on 55 minutes when Jen Candilio intercepted a Wycombe cross and switched play to the left, finding fullback Rilett who steered the ball to Carter who set up Palmer for a clinical finish.

Palmer made it 3-0 minutes later as she danced through the defence to score.

A momentary lapse in concentration by Henley allowed Wycombe to pull a goal back at 65 minutes when they scored from a rebound following a free kick.

Player-Manager Anna West came on for Tominey at 75 minutes whilst Brown-George replaced Hannigan.

Some exciting play followed, with a couple of chances for Houghton denied — her cross screaming wide of the woodwork — and Anna West was also unlucky not to feature on the scoresheet.

Elsewhere in the division, GORING UNITED WOMEN RESERVES went down to a 6-0 home defeat against WRAYSBURY VILLAGE LADIES.