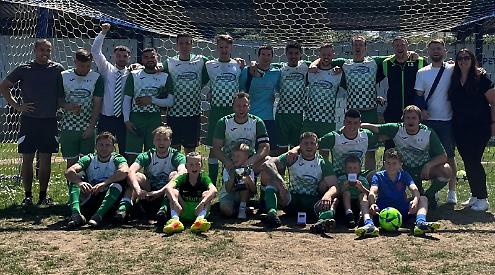 Emmer Green started brightly but it was Exiles that made the breakthrough from the penalty spot to make it 1-0.

The heads of the Emmer Green players didn’t drop and they were level moments later after Jordan Lovelock was fouled in the box and Daniel Donegan converted the penalty spot. Emmer Green took the lead when Jack Drinkwater tried his luck from 30 yards out to catch the keeper off guard and find the net via the crossbar.

116 Exiles continued to pile on the pressure and although Emmer Green defended resolutely they managed to score an equaliser on the 87th minute mark to make it 2-2 and take the game straight to penalties. Emmer Green were confident going into the penalty shootout but the hero of the day was goalkeeper Tom Hemmett who pulled off two outstanding saves in the to deny Exiles.

Pele Hagger, Ben Cousins, Nathan Blissett and Daniel Donegan all scored from the spot for Emmer Green sending them home with the cup while Hemmett was voted man of the match by the league officials and received an award for his performance after the game.