Visitors hit back to secure points on Triangle debut 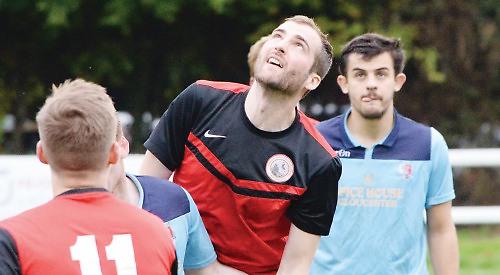 HENLEY TOWN let a one-goal lead slip as they went down 3-1 at home to Longlevens AFC in the Premier Division of the Uhlsport Hellenic League last Saturday.

Longlevens, making their first ever visit to the Triangle ground, started the match on the attack and within the first five minutes both Chris Byrne and Callum Carlisle kicked shots off the goalline with goalkeeper Matt Hill well beaten.

New signing Seve Mayberry, returning to the Triangle for his second stint at the club, broke with pace down the right wing and his cross eluded the Longlevens defence to find Dan Davies on the left and his shot flew past the visitors’ keeper Ollie Hall to put the hosts ahead after 10 minutes.

Instead of consolidating Henley looked shaky and couldn’t keep the ball and it was no surprise when the speedy Longlevens side broke down the right wing and Jonny Lee’s cross found Brad Martin whose left foot shot gave Hill no chance to equalise.

The visitors kept the pressure on the struggling Henley defence and in the 21st minute a fierce shot from Japh Humphries rebounded from the crossbar and Shaun O’Connor was alert to slip the ball past the stranded Hill. Most of the play was towards the Henley goal and the home defence worked hard to keep the score at 2-1 until the 35th minute when Lee’s pace again put the Red Kites’ defence in trouble down the right flank and his cross found Jonty Welch in space in the six-yard box to head past Hill to make it 3-1.

In the second half Henley were more in the game but never made Longlevens keeper Ollie Hall do much work other than the occasional goal kick.

Although the Red Kites improved after the break and had chances they never looked like narrowing the gap.

HENLEY TOWN suffered their 11th Uhlsport Hellenic League Premier Division defeat of the season as they went down 2-0 at unbeaten Thame United on Tuesday night.

The Red Kites competed well but conceded a goal when Andy Gledmill’s shot eluded goalkeeper Matt Hill midway through the first half to give his side the lead at half-time.

In the second half Henley kept battling hard to keep the home side at bay but never pressed Henry Craven in the Thame goal.

Henley kept defending well but referee Fernando Costache awarded Thame United a penalty in the closing stages which Andy Gledmill converted to give his team the 2-0 win.

After the game it was announced that Jack Thomson-Wheeler was moving to Flackwell Heath and this will be the 10th Henley Town player poached by other clubs this season.