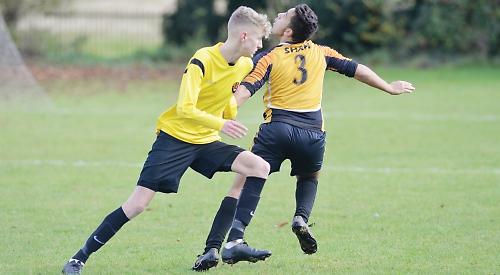 UNDEFEATED East Berks League Division 1 leaders AFC HENLEY STARS U18s progressed to the quarter-finals of the East Berkshire Trophy thanks to a 10-1 win at home to Division 3 local rivals ROTHERFIELD UNITED U18s at Harpsden on Saturday.

The game started brightly with both sides creating chances before the hosts took the lead after 15 minutes through Charlie Borg. The speed and movement of Henley’s play spearheaded by Joey Newman and Charlie Borg was too much for Rotherfield and when Billy Wilson added a second minutes later Rotherfield were always going to be on the back foot.

Henley were beginning to control the game with good pace and added two more before half-time through Joe Newman and George Strong.

Rotherfield started the second half with more composure and played some attractive football and as Henley finally slowed down United came to life and forced a couple of openings testing the Henley keeper.

The two-division gap between the two sides told as the half went on with Newman rattling in another three goals and Strong netting his second of the match. Scott Brown and Ben Shimeld also got their names on the score sheet. With minutes remaining Rotherfield scored a consolation goal

In the next round of the competition AFC Henley Stars make the trip to Twyford Comets.

AFC HENLEY HURRICANES U10s powered to an 8-0 away win at MAIDENHEAD MAGPIES U10s to get their East Berks League campaign back on track.

Finnbar Scott was the driving force behind the victory as he scored twice and had an assist in a match winning contribution.

The Hurricanes started brightly and went into an early lead thanks to a mazy dribble and finish by Tom Yeoman. Soon after Scott scored his first by cutting in from the left and slotting past the keeper.

Man-of-the-match Sam Winters scored the goal of the game as he broke forward from his defensive responsibilities. Carrying the ball from his own half and beating three defenders Winters calmly placed the ball beyond the keeper.

Joe Turner played in Tom Atkinson who was next to score. Atkinson’s quick feet were too nimble for the Magpies defenders as he went into the penalty box before drawing the keeper and slotting the ball into the bottom left of the goal.

Scott delivered a well-flighted corner from which Yeoman powered home a header to make it 5-0 at the break.

Scott got the third quarter off to a fine start by finding space on the left and going on a determined run which saw him leave defenders in his wake before firing home.

Tom Bonser and Nicolai Bruun-Andersen worked tirelessly on either wing and their efforts saw the Magpies score an own goal. Yeoman went on to score wrap up the scoring with his third and his side’s eighth of the match.