Knight bags treble to help side maintain push for title 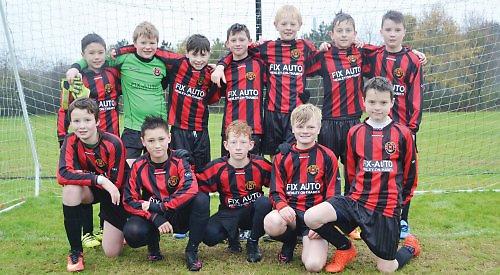 The driving rain and poor conditions were unable to put either team off their stride as both sides started strongly in an end-to-end match.

Hotspurs finally broke the deadlock after 20 minutes with a well-taken goal by George Lamin. A second followed soon after when an interchange down the right hand side gave enough space for Jack Carter to cross to Theo Lock who headed home.

Winnersh were not out of the game and hit back with a goal scored from outside the box. A third goal from Lamin after a well-judged through ball from Knight restored Hotspurs’ two-goal lead. Winnersh came back again just before half-time with a volley that came in off the post to make it 3-2.

Hotspurs extended their lead in the second half with a cool finish from Knight before Winnersh pulled another one back from a corner to make it 4-3.

Both teams looked dangerous going forward, but it was Hotspurs who put the game beyond Winnersh’s reach with another calm finish from Knight after
another testing through ball behind the Winnersh defence.

An injury-hit AFC HENLEY HURRICANES U10s side battled back to earn a 2-2 draw at home to MARLOW TIGERS U10s. With only the bare seven players available the Hurricanes started well and striker Luca Thomson powered through the Tigers defence and sent a powerful strike past the opposition keeper. The visitors struck back early in the second quarter with a goal scored from long range. Captain and man-of-the-match Nicolai Bruun-Andersen fought tenaciously at the back to repel the Tigers while goalkeeper Olly Saunders also had to pull off a string of fine saves to keep the score level. However, just before half-time the Tigers broke away once more to go 2-1 up.

Joe Turner and Sam Winters played well in midfield and hauled the Hurricanes back into the game as their tough tackling and creative forward play began to turn the game around. In the final quarter of the game Tom Atkinson ran down the wing and delivered a ball with accuracy that almost resulted in a goal. The equaliser finally came when Tom Bonser finished well from a Bruun-Andersen through ball.